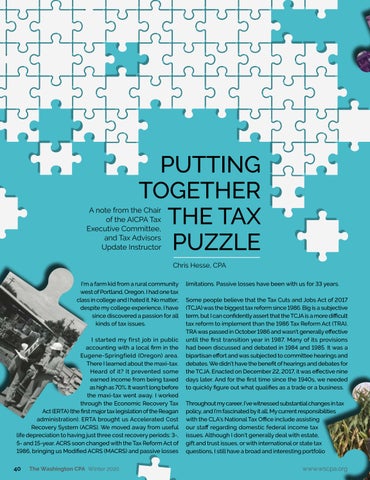 PUTTING TOGETHER THE TAX PUZZLE

A note from the Chair of the AICPA Tax Executive Committee, and Tax Advisors Update Instructor

Chris Hesse, CPA I’m a farm kid from a rural community west of Portland, Oregon. I had one tax class in college and I hated it. No matter; despite my college experience, I have since discovered a passion for all kinds of tax issues. I started my first job in public accounting with a local firm in the Eugene-Springfield (Oregon) area. There I learned about the maxi-tax. Heard of it? It prevented some earned income from being taxed as high as 70%. It wasn't long before the maxi-tax went away. I worked through the Economic Recovery Tax Act (ERTA) (the first major tax legislation of the Reagan administration). ERTA brought us Accelerated Cost Recovery System (ACRS). We moved away from useful life depreciation to having just three cost recovery periods: 3-, 5- and 15-year. ACRS soon changed with the Tax Reform Act of 1986, bringing us Modified ACRS (MACRS) and passive losses

limitations. Passive losses have been with us for 33 years. Some people believe that the Tax Cuts and Jobs Act of 2017 (TCJA) was the biggest tax reform since 1986. Big is a subjective term, but I can confidently assert that the TCJA is a more difficult tax reform to implement than the 1986 Tax Reform Act (TRA). TRA was passed in October 1986 and wasn’t generally effective until the first transition year in 1987. Many of its provisions had been discussed and debated in 1984 and 1985. It was a bipartisan effort and was subjected to committee hearings and debates. We didn’t have the benefit of hearings and debates for the TCJA. Enacted on December 22, 2017, it was effective nine days later. And for the first time since the 1940s, we needed to quickly figure out what qualifies as a trade or a business. Throughout my career, I’ve witnessed substantial changes in tax policy, and I’m fascinated by it all. My current responsibilities with the CLA’s National Tax Office include assisting our staff regarding domestic federal income tax issues. Although I don’t generally deal with estate, gift and trust issues, or with international or state tax questions, I still have a broad and interesting portfolio 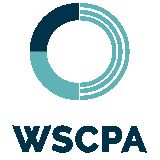 The official publication of the Washington Society of Certified Public Accountants

The official publication of the Washington Society of Certified Public Accountants