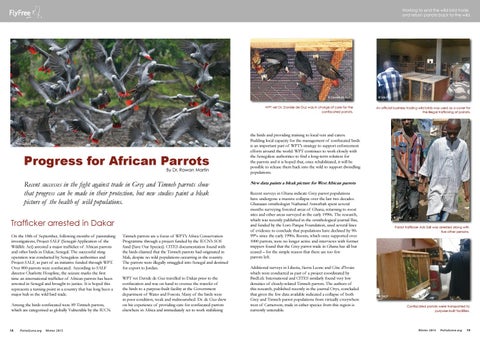 Recent successes in the fight against trade in Grey and Timneh parrots show that progress can be made in their protection, but new studies paint a bleak picture of the health of wild populations.

Trafficker arrested in Dakar On the 18th of September, following months of painstaking investigations, Project SALF (Senegal-Application of the Wildlife Act) arrested a major trafficker of African parrots and other birds in Dakar, Senegal. The successful sting operation was conducted by Senegalese authorities and Project SALF, as part of an initiative funded through WPT. Over 800 parrots were confiscated. According to SALF director Charlotte Houpline, the seizure marks the first time an international trafficker of African parrots has been arrested in Senegal and brought to justice. It is hoped this represents a turning point in a country that has long been a major hub in the wild bird trade. Among the birds confiscated were 89 Timneh parrots, which are categorised as globally Vulnerable by the IUCN.

Timneh parrots are a focus of WPT’s Africa Conservation Programme through a project funded by the IUCN’s SOS fund (Save Our Species). CITES documentation found with the birds claimed that the Timneh parrots had originated in Mali, despite no wild populations occurring in the country. The parrots were illegally smuggled into Senegal and destined for export to Jordan. WPT vet Davide de Guz travelled to Dakar prior to the confiscation and was on hand to oversee the transfer of the birds to a purpose-built facility at the Government department of Water and Forests. Many of the birds were in poor condition, weak and malnourished. Dr. de Guz drew on his experience of providing care for confiscated parrots elsewhere in Africa and immediately set to work stabilising

© SALF An official business trading wild birds was used as a cover for the illegal trafficking of parrots.

the birds and providing training to local vets and carers. Building local capacity for the management of confiscated birds is an important part of WPT’s strategy to support enforcement efforts around the world. WPT continues to work closely with the Senegalese authorities to find a long-term solution for the parrots and it is hoped that, once rehabilitated, it will be possible to release them back into the wild to support dwindling populations.

New data paints a bleak picture for West African parrots Recent surveys in Ghana indicate Grey parrot populations have undergone a massive collapse over the last two decades. Ghanaian ornithologist Nathaniel Annorbah spent several months surveying forested areas of Ghana, returning to roost sites and other areas surveyed in the early 1990s. The research, which was recently published in the ornithological journal Ibis, and funded by the Loro Parque Foundation, used several lines of evidence to conclude that populations have declined by 9099% since the early 1990s. Roosts, which once supported over 1000 parrots, were no longer active and interviews with former trappers found that the Grey parrot trade in Ghana has all but ceased – for the simple reason that there are too few parrots left. Additional surveys in Liberia, Sierra Leone and Côte d’Ivoire which were conducted as part of a project coordinated by BirdLife International and CITES similarly found very low densities of closely-related Timneh parrots. The authors of this research, published recently in the journal Oryx, concluded that given the few data available indicated a collapse of both Grey and Timneh parrot populations from virtually everywhere west of Cameroon, trade in either species from this region is currently untenable.

© SALF Parrot trafficker Aziz Sall was arrested along with five other persons.

Moratorium on trapping in eastern DRC The Democratic Republic of Congo has long been one of the leading exporters of Grey parrots, with swathes of intact forest in the country’s interior likely supporting some of the largest remaining populations. In a reflection of patterns in West Africa, local declines are driving trappers into ever more remote areas with new frontiers of trapping emerging. The Lukuru Foundation has been operating in eastern DRC for many years and with support from WPT has been monitoring wild populations and working with trappers and traders to assess the scale and impact of the trade. In just four months (May-August) this year, a minimum of 6,632 Grey parrots were observed passing through two regional airports. These data provide a clear indication that exports from DRC vastly exceed the recommended CITES quota of 5,000 per year. Taking into account trade through other routes and from other provinces, as well as the high death rates prior to export, the true number of parrots taken from the wild each year plausibly lies in the tens of thousands.

Perhaps most concerning is that many of the trappers and traders interviewed have moved into the area in the last few years and report declines in other provinces where they previously sourced parrots. Within the study area itself, multiple clearings were abandoned this year, as trappers sought more productive sites. The Lukuru Foundation has built strong relationships with provincial authorities and it is hoped that meaningful action to address the unsustainable trapping of parrots will be forthcoming. Initial signs are positive. Following the presentation of the data on the scale and impact of the trade, the Environment ministry of Maniema Province proposed a 6-month moratorium on the trapping of parrots. Shipments of parrots from provincial airports have already been refused.

Matt Kirchhoff is a member of the Association of Donor Relations Professionals, and is working with the WPT as a volunteer from his home in Anchorage, Alaska. Matt moved to Alaska after he graduated from the College of Environmental Sciences and Forestry (NY) in 1975. In Alaska, he and his wife staked land, built a log cabin, and lived a subsistence lifestyle for several years. After completing his graduate degree in Ornithology at the University of Maine, he began a 25-year career as a wildlife research biologist for state and federal agencies, followed by 4 years as the Director of Bird Conservation for Audubon Alaska. He has many peer-reviewed publications to his credit, and most recently, led the completion of a comprehensive Wildlife Action plan for the state of Alaska. Matt has also served as a trustee on a number of nonprofit boards, including as chair of the Audubon Alaska board, and chair (now trustee emeritus) of the Alaska Conservation Foundation. Recently retired, Matt wanted to turn his conservation efforts towards species that are under severe pressure from human interference. Aside from a professional awareness of the plight of wild parrots, Matt also has empathy for companion parrots via experience with his son’s Green-cheeked Conure and Hahn’s Macaw. Although he could potentially help in several capacities given his experience, Matt felt he could do the most good by strengthening relationships with our supporters — the ones who fuel WPT’s success, and is eager to work with others who share a passion for parrots and conservation. We are thrilled to welcome Matt to the WPT flock!

Tony Juniper is an independent sustainability and environment advisor based in the UK. He has served as Special Advisor with the Prince’s Charities International Sustainability Unit, is a Fellow with the University of Cambridge Institute for Sustainability Leadership, a founding member of the Robertsbridge Group, and President of the Society for the Environment. He began his career as an ornithologist, continuing a lifelong interest in birds and parrots in particular. In 1989 he joined the staff at International Council for Bird Preservation (now BirdLife International) to run the organisation’s programme to conserve threatened parrots. In 1990 Dr. Juniper accompanied a team of scientists to search for wild populations of Spix’s Macaws in the arid northeast of Brazil, with a project that was partially funded by the WPT. The discovery of a single remaining bird in a relict fragment of habitat helped to spark an international rescue programme for the species. Despite moving to Friends of the Earth in 1990 to run that organisation’s tropical rainforest campaign, Dr. Juniper retained a deep interest in parrots and in 1998 published, with his co-author Mike Parr, the awardwinning Parrots - A Guide to the Parrots of the World. In 2002 he published the widely acclaimed Spix’s Macaw - The Race to Save the World’s Rarest Bird. Dr. Juniper was asked recently what it is about parrots that drew him into the parrot world. He replied: “As a child, I became interested in keeping birds in an aviary and so I began to learn about them, not only from the point of view of their lives in the wild, but also through a very basic interest in aviculture. As time went on, one interest broadened into issues of habitat destruction and tropical forests, and so all these areas came together. In parrots you find these almost human qualities, these bright colours, the intelligence, which kind of adds to the ones that you naturalistically have and adds a new dimension. I guess for me it is a combination of those things that draws me towards them.” We are honoured to welcome Dr. Tony Juniper as WPT’s Ambassador, in addition to continuing his work as our scientific advisor. In this role, he will work with WPT to raise awareness of the most critical issues facing parrots.

Go online to listen to the interview between WPT’s Tony Juniper and Charlie Moores of Talking Naturally in the Learn > Podcasts section of our website.