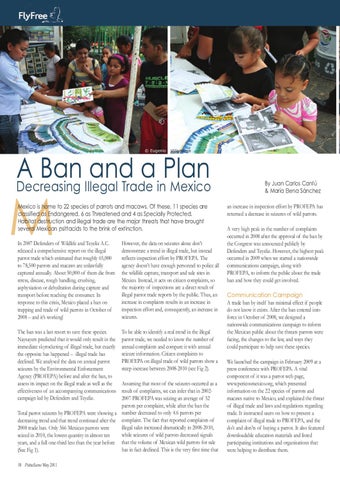 A Ban and a Plan Decreasing Illegal Trade in Mexico Mexico is home to 22 species of parrots and macaws. Of these, 11 species are classified as Endangered, 6 as Threatened and 4 as Specially Protected. Habitat destruction and illegal trade are the major threats that have brought several Mexican psittacids to the brink of extinction. In 2007 Defenders of Wildlife and Teyeliz A.C. released a comprehensive report on the illegal parrot trade which estimated that roughly 65,000 to 78,500 parrots and macaws are unlawfully captured annually. About 50,000 of them die from stress, disease, rough handling, crushing, asphyxiation or dehydration during capture and transport before reaching the consumer. In response to this crisis, Mexico placed a ban on trapping and trade of wild parrots in October of 2008 – and it’s working!

The ban was a last resort to save these species. Naysayers predicted that it would only result in the immediate skyrocketing of illegal trade, but exactly the opposite has happened – illegal trade has declined. We analysed the data on annual parrot seizures by the Environmental Enforcement Agency (PROFEPA) before and after the ban, to assess its impact on the illegal trade as well as the effectiveness of an accompanying communications campaign led by Defenders and Teyeliz.

To be able to identify a real trend in the illegal parrot trade, we needed to know the number of annual complaints and compare it with annual seizure information. Citizen complaints to PROFEPA on illegal trade of wild parrots show a steep increase between 2008-2010 (see Fig 2).

Assuming that most of the seizures occurred as a result of complaints, we can infer that in 20022007 PROFEPA was seizing an average of 52 parrots per complaint, while after the ban the Total parrot seizures by PROFEPA were showing a number decreased to only 4.6 parrots per decreasing trend and that trend continued after the complaint. The fact that reported complaints of illegal sales increased dramatically in 2008-2010, 2008 trade ban. Only 566 Mexican parrots were while seizures of wild parrots decreased signals seized in 2010, the lowest quantity in almost ten years, and a full one-third less than the year before that the volume of Mexican wild parrots for sale has in fact declined. This is the very first time that (See Fig 1). 10 PsittaScene May 2011

By Juan Carlos Cantú & María Elena Sánchez an increase in inspection effort by PROFEPA has returned a decrease in seizures of wild parrots. A very high peak in the number of complaints occurred in 2008 after the approval of the ban by the Congress was announced publicly by Defenders and Teyeliz. However, the highest peak occurred in 2009 when we started a nationwide communications campaign, along with PROFEPA, to inform the public about the trade ban and how they could get involved. Communication Campaign A trade ban by itself has minimal effect if people do not know it exists. After the ban entered into force in October of 2008, we designed a nationwide communications campaign to inform the Mexican public about the threats parrots were facing, the changes to the law, and ways they could participate to help save these species. We launched the campaign in February 2009 at a press conference with PROFEPA. A vital component of it was a parrot web page, www.pericosmexico.org, which presented information on the 22 species of parrots and macaws native to Mexico, and explained the threat of illegal trade and laws and regulations regarding trade. It instructed users on how to present a complaint of illegal trade to PROFEPA, and the do’s and don’ts of buying a parrot. It also featured downloadable education materials and listed participating institutions and organisations that were helping to distribute them.

Mexico’s parrot trade ban was augmented by a broad plan to engage citizens in learning about parrots and reporting illegal birds. Thousands of posters and colouring books were distributed all across the country, increasing awareness dramatically.

Thanks to generous donations from individuals like Bill & Terry Pelster, and the World Parrot Trust, Folke H. Peterson Foundation and IFAW we produced more than 71,000 posters, children’s storybooks, colouring books, comic books and stickers and distributed them throughout Mexico. Dozens of institutions and organisations joined in this effort, including governmental institutions like the Environmental Enforcement Agency, Environment Ministry, National Commission of Natural Protected Areas, Mexico City’s Environment Ministry, Mexico City zoos; universities like UNAM, UAM, UDG, Tec de Monterrey, among others; NGOs like Greenpeace, Pronatura, IFAW, CEMDA, Comarino, GEMA, among others; as well as scientists, private companies and individuals.

Dozens of stories appeared in the media (newspapers, magazines, radio, television, internet news services and blogs) since the communications campaign began. We have constantly talked about the campaign against illegal trade of parrots on our weekly radio program “Supervivencia” and given dozens of presentations in symposiums, bird festivals, children’s festivals, schools, etc. A fact revealed by the complaint data is that from 2002 to 2007 PROFEPA received complaint reports of illegal parrot trade from 21 states, while between 2008 and 2010 there were complaints from all 32 of Mexico’s states. Thus, the campaign reached the whole country, making people aware of the problem and getting them to participate in its solution by not buying wild parrots and denouncing illegal trade.

Illegal trade of parrots is a very difficult problem to solve; in fact, we will never stop it altogether. However, it can be diminished considerably and controlled so that it doesn’t have such a negative effect on wild populations. We have now documented that the illegal trade of Mexican wild parrots has started to decrease, and that this decrease is due to the 2008 parrot trade ban and the communications campaign we started in 2009 with the help of a great many people and their organisations. Trade bans do work, and decision makers should not balk at using them to control illegal trade and help wildlife conservation. Juan Carlos Cantú is Director of Programs for Defenders of Wildlife México. María Elena Sánchez is President of Teyeliz A.C

The trade ban and communications campaign have resulted in more citizens reports and inspections, yet the number of seizures have declined, thus illegal trade has decreased. May 2011 PsittaScene 11