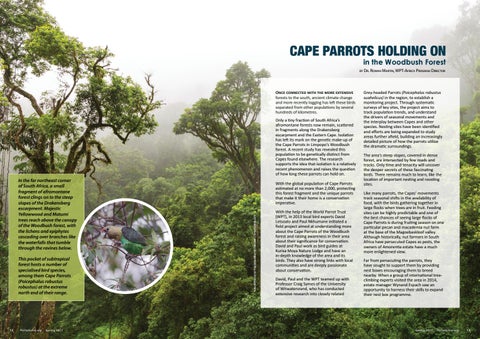 cape parrots holding on in the Woodbush Forest

Once connected with the more extensive forests to the south, ancient climate change and more recently logging has left these birds separated from other populations by several hundreds of kilometres. Only a tiny fraction of South Africa’s afromontane forests now remain, scattered in fragments along the Drakensberg escarpment and the Eastern Cape. Isolation has left its mark on the genetic make-up of the Cape Parrots in Limpopo’s Woodbush forest. A recent study has revealed this population to be genetically distinct from Capes found elsewhere. The research supports the idea that isolation is a relatively recent phenomenon and raises the question of how long these parrots can hold on.

In the far northeast corner of South Africa, a small fragment of afromontane forest clings on to the steep slopes of the Drakensberg escarpment. Majestic Yellowwood and Matumi trees reach above the canopy of the Woodbush forest, with the lichens and epiphytes cascading over branches like the waterfalls that tumble through the ravines below.

This pocket of subtropical forest hosts a number of specialised bird species, among them Cape Parrots (Poicephalus robustus robustus) at the extreme north end of their range.

With the global population of Cape Parrots estimated at no more than 2,000, protecting this forest fragment and the unique parrots that make it their home is a conservation imperative. With the help of the World Parrot Trust (WPT), in 2013 local bird experts David Letsoalo and Paul Nkhumane initiated a field project aimed at understanding more about the Cape Parrots of the Woodbush forest and raising awareness in their area about their significance for conservation. David and Paul work as bird guides at Kurisa Moya Nature Lodge and have an in-depth knowledge of the area and its birds. They also have strong links with local communities and are deeply passionate about conservation. David, Paul and the WPT teamed up with Professor Craig Symes of the University of Witwatersrand, who has conducted extensive research into closely related

Grey-headed Parrots (Poicephalus robustus suahelicus) in the region, to establish a monitoring project. Through systematic surveys of key sites, the project aims to track population trends, and understand the drivers of seasonal movements and the interplay between Capes and other species. Nesting sites have been identified and efforts are being expanded to study areas further afield, building an increasingly detailed picture of how the parrots utilize the dramatic surroundings. The area’s steep slopes, covered in dense forest, are intersected by few roads and tracks. Only time and tenacity will uncover the deeper secrets of these fascinating birds. There remains much to learn, like the location of important nesting and roosting sites. Like many parrots, the Capes’ movements track seasonal shifts in the availability of food, with the birds gathering together in large flocks when trees are in fruit. Feeding sites can be highly predictable and one of the best chances of seeing large flocks of Cape Parrots is during fruiting season on one particular pecan and macademia nut farm at the base of the Magoebaskloof valley. Although historically, nut farmers in South Africa have persecuted Capes as pests, the owners of Amorentia estate have a much more enlightened view. Far from persecuting the parrots, they have sought to support them by providing nest boxes encouraging them to breed nearby. When a group of international treeclimbing experts visited the area in 2014, estate manager Wynand Espach saw an opportunity to harness their skills to expand their nest box programme.

Cape Parrot Awareness: A Grassroots Effort David Letsoalo is a Bird Guide at Kurisa Moya Nature Lodge in the Woodbush forest of Magoebaskloof, Limpopo - the second largest indigenous forest in South Africa. Here he speaks about inspiring the next generation of conservationists:

“Cape Parrots are beautiful, sociable and intelligent birds and I feel a surge of excitement every time I see them flying over or balancing in the tree-tops to forage for forest feasts. Whether they are preening or grooming each other, foraging or excavating a nesting cavity, they are a fascinating and entertaining species. I have been studying the parrots - in association with the World Parrot Trust and the University of Witwatersrand - for 2 years, and am the co-ordinator of the annual Cape Parrot Count in Limpopo, so I have had many opportunities to observe how they communicate and take care of their young. There is already pressure on the species due to Beak and Feather Disease, but they are also under threat from nest-robbers who take the chicks to sell.

The World Parrot Trust would like to thank the many donors - particularly the Isdell Family Foundation, Ilana and Sean Mercer, Paula Feldman, The Bridging Peace Foundation and Fran Vogel - for their generous support of Cape Parrot conservation. Additional thanks to David Letsoalo, Paul Nkhumane, Lisa Martus and all at Kurisa Moya Nature Lodge (a great place to base your trip to see Cape Parrots!)

I am passionate about these birds and their conservation, as are many in my community. The various groups in the Magoebaskloof, Haenertsburg, Tzaneen, Kudu’s River Valley and Politsi have an ongoing interest and commitment to preserving them. The Cape Parrot Educational Project has focused on many school children, in particular Lerato Combined School and Hlalefa Primary School, which are situated near to where the Cape Parrots come to forage for pecan nuts in season. So it is relevant to these kids to understand why they should celebrate these birds and help to protect them. In a series of dynamic lessons, using tailor-made games, puzzles, activity cards and stickers to inspire and interest the kids, the message of the importance of this species and their conservation has been brought across. And through competitions and prizes, fun activities and planting trees for the school, the kids become more actively involved and the increased awareness should result in increased ownership and protectiveness. The project is making a difference, one child at a time, and ensuring that Cape Parrots are a feature of the skies above Limpopo for generations to come.”

Although the population remains small and the situation precarious, the diversity of conservation efforts for Capes in the Woodbush forest bodes well for their future. As more is learned through painstaking research, efforts will be further refined and targeted where they can impact the most. Perhaps the best reason to have hope is that these efforts are driven by passionate local people intent on inspiring the conservationists of tomorrow.

Recognising that the future of Woodbush forest and the magnificent trees which support Cape Parrots lies in the hands of the next generation, David Letsoalo has driven the development of an outreach programme in the region’s schools. Through the assistance of the World Parrot Trust over 100 children have been treated to David’s passion and enthusiasm for the forest and its birds. A variety of games and other activities

have provided opportunities both inside and outside the classroom for children to learn about the close association between the Woodbush forest’s ancient trees and its most charismatic birds. Planting trees around their school has given these future ‘guardians of the forest’ a personal stake in parrot conservation, making an impact on the area that will extend beyond their own lifetime. Following initial successes, the outreach programme is set to continue.

Joining forces, the group ‘Explore Trees’ was born and has since gone on to assist conservation projects for Timneh Parrots in Guinea-Bissau (see ‘Climbing High for Timneh Parrots’, PsittaScene Summer 2016) and Lear’s Macaws in Brazil. Following efforts to discourage bees from taking over the nest boxes it is hoped that Cape Parrots will soon take up residence. Lessons learned here could be invaluable for boosting breeding populations elsewhere in their range.

that tice sick is You no rrot a pa get help. ps and 2 ste Move ard. forw

ne a sto row nest. You thparrot ps at a 3 ste Move ! back

Special thanks to Aeri Wittenburgh for volunteering her time and expertise to assist with the graphical design of educational resources, Trevor Hardaker for kindly sharing his photos and Nicholas Bishop for designing the Cape Parrot cartoon now adorning classrooms throughout the area. Spring 2017

Are Cape Parrots a separate species? ...and does it matter? Researchers at the University of KwaZuluNatal recently analysed genetic samples from throughout their range of Cape Parrots with the aim of settling a decades-old debate over their taxonomic status; should these birds be considered a species in their own right, or are they merely a subspecies of a parrot variously described as Brownnecked or Grey-headed Parrots, (Poicephalus robustus fuscicollis and P. r. suahelicus) widely spread throughout southern Africa?

The new research suggested that the most recent common ancestor of the two parrots lived between 2.17 and 2.67 million years ago in the late Pliocene to early Pleistocene epoch. This period saw great changes in climate, where grasslands and forests were expanding and contracting, which likely led to isolation and divergence of populations.

This is not a trivial question and draws on discussions over the definition of a species, which have occupied taxonomists since the time of Darwin. The categorisation also has significant ramifications for conservation. As conservationists strive to efficiently allocate resources, indices such as the IUCN Red List are increasingly influential for deciding what gets saved – and what doesn’t.

This new information paved the way for the acceptance of Cape Parrots as a distinct species by the Convention on International Trade in Endangered Species of Fauna and Flora (CITES), in 2016.

It also prompted BirdLife International, the IUCN Red-List authority for birds, to take a closer look at the differences in morphology, vocalisations, ecology, behaviour and the degree of geographic separation between putative species. This is the criteria under which many species splits were evaluated for the

recently updated Checklist of the Birds of the World (del Hoyo et al. 2014). Following this re-evaluation it was determined that Capes are sufficiently different in plumage (greener head, darker wing coverts and flight feathers, less extensive red on the head of females) are smaller (markedly smaller bill) and have distinctly different calls from suahelicus/fuscicollis to be recognised as a distinct species. Cape Parrots will now have their threat status evaluated for the IUCN Red-List of Threatened Species. The iconic ‘Green and gold’ Cape parrots have, for some time, been considered Endangered on the South African Red Databook and are fortunate to have many passionate individuals and groups like the World Parrot Trust, The Cape Parrot Project, The Cape Parrot Working Group, Explore Trees, BirdLife South Africa and others working for their protection in South Africa.

Cape Parrots Holding On in the Woodbush Forest

Cape Parrots Holding On in the Woodbush Forest