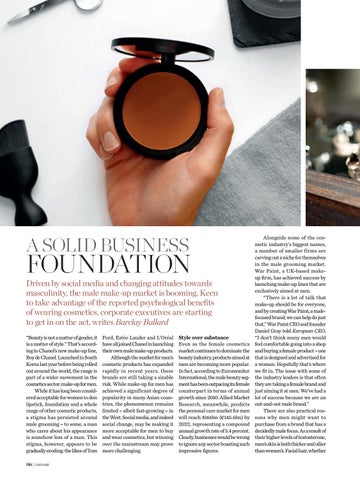 Driven by social media and changing attitudes towards masculinity, the male make-up market is booming. Keen to take advantage of the reported psychological benefits of wearing cosmetics, corporate executives are starting to get in on the act, writes Barclay Ballard “Beauty is not a matter of gender, it is a matter of style.” That’s according to Chanel’s new make-up line, Boy de Chanel. Launched in South Korea last year before being rolled out around the world, the range is part of a wider movement in the cosmetics sector: make-up for men. While it has long been considered acceptable for women to don lipstick, foundation and a whole range of other cosmetic products, a stigma has persisted around male grooming – to some, a man who cares about his appearance is somehow less of a man. This stigma, however, appears to be gradually eroding: the likes of Tom 116 | EuropeanCEO

Ford, Estée Lauder and L’Oréal have all joined Chanel in launching their own male make-up products. Although the market for men’s cosmetic products has expanded rapidly in recent years, these brands are still taking a sizable risk. While make-up for men has achieved a significant degree of popularity in many Asian countries, the phenomenon remains limited – albeit fast-growing – in the West. Social media, and indeed social change, may be making it more acceptable for men to buy and wear cosmetics, but winning over the mainstream may prove more challenging.

Style over substance Even as the female cosmetics market continues to dominate the beauty industry, products aimed at men are becoming more popular. In fact, according to Euromonitor International, the male beauty segment has been outpacing its female counterpart in terms of annual growth since 2010. Allied Market Research, meanwhile, predicts the personal care market for men will reach $166bn (€145.6bn) by 2022, representing a compound annual growth rate of 5.4 percent. Clearly, businesses would be wrong to ignore any sector boasting such impressive figures.

Alongside some of the cosmetic industry’s biggest names, a number of smaller firms are carving out a niche for themselves in the male grooming market. War Paint, a UK-based makeup firm, has achieved success by launching make-up lines that are exclusively aimed at men. “There is a lot of talk that make-up should be for everyone, and by creating War Paint, a malefocused brand, we can help do just that,” War Paint CEO and founder Daniel Gray told European CEO. “I don’t think many men would feel comfortable going into a shop and buying a female product – one that is designed and advertised for a woman. Hopefully that’s where we fit in. The issue with some of the industry leaders is that often they are taking a female brand and just aiming it at men. We’ve had a lot of success because we are an out-and-out male brand.” There are also practical reasons why men might want to purchase from a brand that has a decidedly male focus. As a result of their higher levels of testosterone, men’s skin is both thicker and oilier than women’s. Facial hair, whether 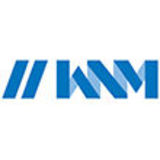 The Spring 2019 edition of European CEO

The Spring 2019 edition of European CEO