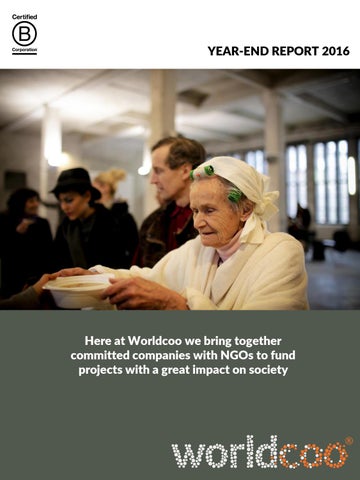 Achievements 2016 2016 has been a year of consolidation at Worldcoo: we've laid the groundwork to become the leading tool to fund projects thanks to the €500,000 raised through donations from more than 250 people that, since 2013, has gone to fund 100 projects, with the help of more than 20 companies with a cause that are collaborating with us.

We have successfully launched a new fundraising channel that allows clients and employees in large corporations to make donations, encouraging their social commitment. 50% of the €326,383 raised this year were through this channel. Plus, we have consolidated our place in the online banking sector. One example of this is our new partnership with Banco Sabadell: “Actitud Solidaria”.

On the other hand, we are proud to have raised more than €100,000 for the humanitarian emergencies caused by conflicts and natural disasters.

We've also secured a capital increase, which will allow us to tackle two of our greatest challenges: internationalising the company and developing new fundraising formulas. To do so, we now have a team of 12 people. As a result of all of this, B Corporation has recognised us as one of the "Best Companies for the World", from a total of over 1,800 companies around the world. In short, we’ve put together everything we need to make 2017 a great year and we’re going to work our hardest to make sure it happens. Sergi Figueres CEO -3-

Best for the world

In 2016, we raised €316,383, up 99% from 2015, which went to fund 70 projects – 53 of these were completed last year and the rest continue to receive funding. This was possible thanks to the 112,596 donors who contributed on average €2.80, more than double the average amount last year. This increase is due to the new fundraising channel we have created, which allows donors to contribute larger sums, as well as more e-commerce sites starting to work with the multi-amount widget. Of the 70 projects active in 2016, nearly one third were associated with emergency campaigns, 13 more than the previous year. This means a growth in donations of 190%. The funds have gone to addressing the needs of refugees crossing the Mediterranean or fleeing from conflicts in Africa and people who have suffered the consequences of natural disasters, like those in Ecuador and Haiti.

Type of Project by area

We've been able to address these needs quickly through coordinated work with the collaborating companies with a cause, social organisations and the solidarity of more than 100,000 donors. To give just one example, we raised €40,000 in record time for the earthquake in Ecuador: just 15 days. -4-

Education projects also showed significant growth in donations, up 308% for the 16 projects. Most of these (13) focused on ensuring education for children, young people and women in conflict zones in Asia and Africa. Unlike the previous year, the healthcare projects (14) focused mainly on research and care for sick children in Spain, receiving 334% more donations. Most of the food projects went to fighting childhood malnourishment in Africa (3), mainly, and to helping at-risk families in Spain (8). This area has decreased as a result of the improvement to the local economy.

90% of all donations go to emergency, education, healthcare and food projects

Two of our ambassadors visited two projects in Africa, allowing us to complete the 24 projects already audited. This means we have followed up on 100% of the projects executed in 2015 and 50% of those from last year.

Through all of the projects funded at 41 NGOs, we have directly helped more than 98,000 people in 26 different countries, which means the aid has been spread over more countries.

The countries to receive the most donations were: Spain and the countries affected by some kind of emergency, like Ecuador, Haiti, Syria and the horn of Africa.

41% of all projects has been executed in Spain

* Note: “No child without food this Christmas” project will be executed in different countries: Portugal, México, Chile, Argentina, Brasil & Colombia.

The countries to receive the most donations were: Spain (36%) and the countries affected by some kind of emergency (41%)

2.287 children from the 70 poorest countries were vaccinated Source: compiled internally

Highlights Beyond the figures regarding the social impact, we want to share some of the actions and milestones we reached in 2016 that have allowed us to set ourselves up as one of the "Best Companies for the World" and lay the groundwork for our internationalization process.

We received a capital increase of €2.3 million in funds from Mnext, Caixa Capital Risc and other private investors, in addition to a European grant through the H2020 research and innovation programme. We signed the “Actitud Solidaria” partnership to manage social campaigns for BS Online (October). “One of the things we value most about Worldcoo is that they audit each and every one of the projects they collaborate on, which is key for having total transparency as to where the funds donated end up.” – Josep Oliu, President of Banc Sabadell.

We have five new ambassadors! Two of them, Joana and Jordi, visited our projects in Kenya and Uganda to audit them.

We did our first corporate volunteering with Assís to promote the inclusion of homeless people.

Our e-commerce companies with a cause also joined the movement with several special actions for their users and raised €768 that day.

We've been recognised as one of the "Best Companies for the World" by Benefit Corporation, an international movement with more than 1,800 companies around the world (September).

ยกTOGETHER WE CAN DO GREAT THINGS! 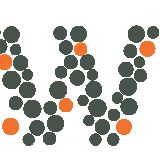 Here you have our anual Report.

Here you have our anual Report.