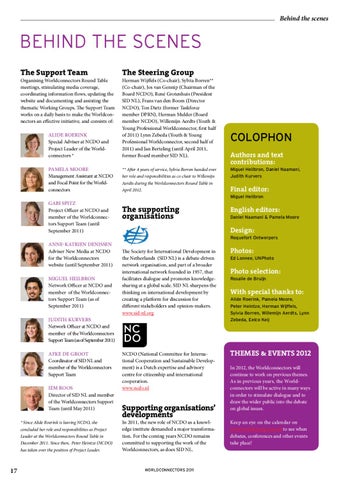 BEHIND THE SCENES The Support Team

Organising Worldconnectors Round Table meetings, stimulating media coverage, coordinating information flows, updating the website and documenting and assisting the thematic Working Groups. The Support Team works on a daily basis to make the Worldconnectors an effective initiative, and consists of:

** After 4 years of service, Sylvia Borren handed over her role and responsibilities as co-chair to Willemijn Aerdts during the Worldconnectors Round Table in April 2012.

The Society for International Development in the Netherlands (SID NL) is a debate-driven network organisation, and part of a broader international network founded in 1957, that facilitates dialogue and promotes knowledgesharing at a global scale. SID NL sharpens the thinking on international development by creating a platform for discussion for different stakeholders and opinion-makers. www.sid-nl.org

NCDO (National Committee for International Cooperation and Sustainable Development) is a Dutch expertise and advisory centre for citizenship and international cooperation. www.ncdo.nl

Supporting organisations’ developments In 2011, the new role of NCDO as a knowledge institute demanded a major transformation. For the coming years NCDO remains committed to supporting the work of the Worldconnectors, as does SID NL.

With special thanks to:

Themes & Events 2012 In 2012, the Worldconnectors will continue to work on previous themes. As in previous years, the World­ connectors will be active in many ways in order to stimulate dialogue and to draw the wider public into the debate on global issues. Keep an eye on the calendar on www.world­­connectors.nl to see when debates, conferences and other events take place! The Worldconnectors are opinion leaders in the public, business, policy, civil society and political arena. We critically analyse current tr...

The Worldconnectors are opinion leaders in the public, business, policy, civil society and political arena. We critically analyse current tr...