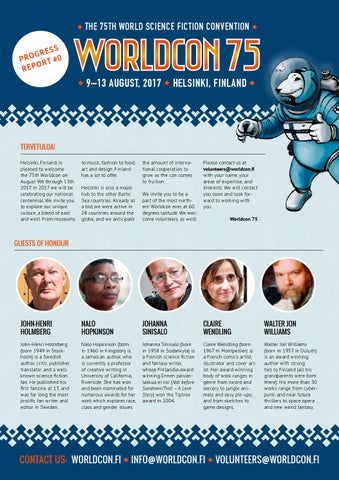 TERVETULOA! Helsinki, Finland, is pleased to welcome the 75th Worldcon on August 9th through 13th 2017. In 2017 we will be celebrating our national centennial. We invite you to explore our unique culture, a blend of east and west. From museums

to music, fashion to food, art and design, Finland has a lot to offer. Helsinki is also a major hub to the other Baltic Sea countries. Already as a bid, we were active in 28 countries around the globe, and we anticipate

the amount of interna­ tional cooperation to grow as the con comes to fruition. We invite you to be a part of the most north­ ern Worldcon ever, at 60 degrees latitude. We wel­ come volunteers, as well!

Please contact us at volunteers@worldcon.fi with your name, your areas of expertise, and interests. We will contact you soon and look for­ ward to working with you. Worldcon 75

John-Henri Holmberg (born 1949 in Stock­ holm) is a Swedish author, critic, publisher, translator, and a wellknown science fiction fan. He published his first fanzine at 13, and was for long the most prolific fan writer and editor in Sweden.

Nalo Hopkinson (born in 1960 in Kingston) is a Jamaican author, who is currently a professor of creative writing in University of California, Riverside. She has won and been nominated for numerous awards for her work which explores race, class and gender issues.

Johanna Sinisalo (born in 1958 in Sodankylä) is a Finnish science fiction and fantasy writer, whose Finlandia-award winning Ennen päivän­ laskua ei voi (Not before Sundown/Troll – A Love Story) won the Tiptree award in 2004.

Claire Wendling (born 1967 in Montpellier) is a French comics artist, illustrator and cover art­ ist. Her award-winning body of work ranges in genre from sword and sorcery to jungle ani­ mals and sexy pin-ups, and from sketches to game designs.

Walter Jon Williams (born in 1953 in Duluth) is an award winning author with strong ties to Finland (all his grandparents were born there). His more than 30 works range from cyber­ punk, and near future thrillers to space opera and new weird fantasy.

Chairs Jukka Halme has chaired and co-chaired three Finn­ cons, including the mas­ sive Finncon-Anime­con in 2009 (over 10 000 attend­ ees), and has also been in charge of programming at Finncon and Åcon for several years. Jukka has been actively involved in the Finnish and Nordic fandom since the early 80s, doing everything possible from gophering to editing and beyond. He has also been the fan GoH of two Eurocons. In his free time he works for the City of Helsinki and minds his two dogs with his lovely wife.

Facilities Messukeskus, Expo and Convention Centre Helsinki, is our site for Worldcon 75. It is acces­ sible, has modern tech, and over 20 restaurants of different styles, great staff and flexibility about our needs. Messukeskus is close to the Helsinki city centre. The world’s safest and most reliable public transport will take you there and around the city – with a free travel pass to all our members, courtesy of the City of Helsinki. We have preliminary contracts with two large hotel chains in Finland, and have in total 1400 rooms reserved. These include all the 244 rooms in Holiday Inn Messu­keskus, which is attached to the con site and has some easy

Team HAH: Jukka HALME, Saija ARO, Crystal HUFF. Saija Aro has been making Finncons happen for over 20 years, working at every level from gophering to co-chairing (the last one in 2014 was on the small side with 3000 attendees). She also ran the memorable Finnish room party at Interac­ tion, dabbles with other conventions, fandom organizations and art happenings. In her civil life she manages things at an eco company, a set of twins and a (former) bid chair.

Crystal Huff began staff­ ing conventions at her very first one. She has helped run Publications, Massage Den, Member Services, Staff Den, the Photo Booth, Staff Services, and Volun­ teers, variously, at Arisia, Boskone, and Worldcon, with occasional side forays into volunteering at Balticon, Transcending Boundaries Conference, and SXSW. She served as chair of Arisia 2011, Relaxacon 2011, and Readercons 23, 24, and 25. Crystal lives in Bos­ ton with her family.

membership rates access rooms. The door to door travel time from the farthest of our hotels to the convention centre is 22 minutes. The room rates are being negotiated, but as is the norm in Finland, the rates will include taxes, break­ fast, and wireless internet. Typical hotel breakfast in Finland includes a wide variety of cold and warm buffet items.

Friends and subscribers of the Helsinki in 2017 Worldcon bid who voted in site selection are automatic full attending members of Worldcon 75. If you wish to receive paper copies of the convention’s publications, we’ll be happy to send those to you for an additional €10 / $12 fee.

Helsinki, Finland, is pleased to welcome the 75th Worldcon on August 9th through 13th 2017. In 2017 we will be celebrating our national centennial. We invite you to explore our unique culture, a blend of east and west. From museums to music, fashion to food, art and design, Finland has a lot to offer.