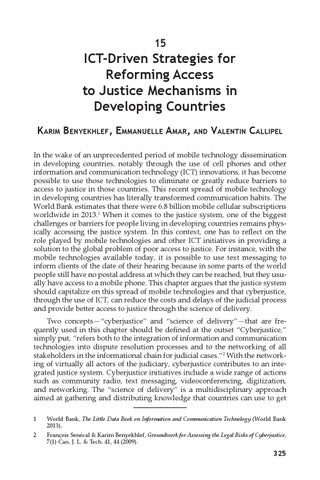 In the wake of an unprecedented period of mobile technology dissemination in developing countries, notably through the use of cell phones and other information and communication technology (ICT) innovations, it has become possible to use those technologies to eliminate or greatly reduce barriers to access to justice in those countries. This recent spread of mobile technology in developing countries has literally transformed communication habits. The World Bank estimates that there were 6.8 billion mobile cellular subscriptions worldwide in 2013.1 When it comes to the justice system, one of the biggest challenges or barriers for people living in developing countries remains physically accessing the justice system. In this context, one has to reflect on the role played by mobile technologies and other ICT initiatives in providing a solution to the global problem of poor access to justice. For instance, with the mobile technologies available today, it is possible to use text messaging to inform clients of the date of their hearing because in some parts of the world people still have no postal address at which they can be reached, but they usually have access to a mobile phone. This chapter argues that the justice system should capitalize on this spread of mobile technologies and that cyberjustice, through the use of ICT, can reduce the costs and delays of the judicial process and provide be er access to justice through the science of delivery. Two concepts—“cyberjustice” and “science of delivery”—that are frequently used in this chapter should be defined at the outset “Cyberjustice,” simply put, “refers both to the integration of information and communication technologies into dispute resolution processes and to the networking of all stakeholders in the informational chain for judicial cases.”2 With the networking of virtually all actors of the judiciary, cyberjustice contributes to an integrated justice system. Cyberjustice initiatives include a wide range of actions such as community radio, text messaging, videoconferencing, digitization, and networking. The “science of delivery” is a multidisciplinary approach aimed at gathering and distributing knowledge that countries can use to get 1

"Many developing countries have the capacity to develop broad development policy directions and formulate development programs that are logical and consistent, but these do not obtain the desired or targeted results because of challenges in the delivery system. It is increasingly apparent that development efforts must be carefully crafted and targeted in the right way to achieve the most effective results in an efficient manner. Recent literature in development studies evidence the important role of 'delivery' in actualizing positive and efficient development impact. Improving delivery and development impact requires a multidisciplinary approach. Development practitioners devoted to rule of law and justice must conjoin their efforts, concepts, tools and knowledge with experts from various disciplines so as to shape a delivery system that adds economic and social value to ultimate beneficiaries of development. In the foregoing light, the book brings together the diverse perspectives o 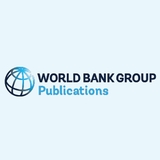