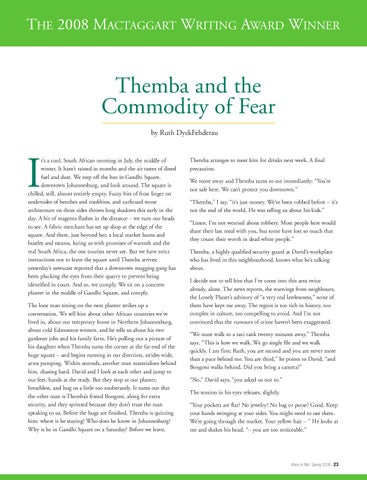 Themba and the Commodity of Fear by Ruth DyckFehderau

t’s a cool, South African morning in July, the middle of winter. It hasn’t rained in months and the air tastes of diesel fuel and dust. We step off the bus in Gandhi Square, downtown Johannesburg, and look around. The square is chilled, still, almost entirely empty. Fuzzy bits of frost linger on undersides of benches and trashbins, and curlicued stone architecture on three sides throws long shadows this early in the day. A bit of magenta flashes in the distance – we turn our heads to see. A fabric merchant has set up shop at the edge of the square. And there, just beyond her, a local market hums and bustles and steams, luring us with promises of warmth and the real South Africa, the one tourists never see. But we have strict instructions not to leave the square until Themba arrives; yesterday’s newscast reported that a downtown mugging gang has been plucking the eyes from their quarry to prevent being identified in court. And so, we comply. We sit on a concrete planter in the middle of Gandhi Square, and comply. The lone man sitting on the next planter strikes up a conversation. We tell him about other African countries we’ve lived in, about our temporary home in Northern Johannesburg, about cold Edmonton winters, and he tells us about his two gardener jobs and his family farm. He’s pulling out a picture of his daughter when Themba turns the corner at the far end of the huge square – and begins running in our direction, strides wide, arms pumping. Within seconds, another man materializes behind him, chasing hard. David and I look at each other and jump to our feet, hands at the ready. But they stop at our planter, breathless, and hug us a little too exuberantly. It turns out that the other man is Themba’s friend Bongoni, along for extra security, and they sprinted because they don’t trust the man speaking to us. Before the hugs are finished, Themba is quizzing him: where is he staying? Who does he know in Johannesburg? Why is he in Gandhi Square on a Saturday? Before we leave,

Themba arranges to meet him for drinks next week. A final precaution. We move away and Themba turns to me immediately: “You’re not safe here. We can’t protect you downtown.” “Themba,” I say, “it’s just money. We’ve been robbed before – it’s not the end of the world. He was telling us about his kids.” “Listen. I’m not worried about robbery. Most people here would share their last meal with you, but some have lost so much that they count their worth in dead white people.” Themba, a highly qualified security guard at David’s workplace who has lived in this neighbourhood, knows what he’s talking about. I decide not to tell him that I’ve come into this area twice already, alone. The news reports, the warnings from neighbours, the Lonely Planet’s advisory of “a very real lawlessness,” none of them have kept me away. The region is too rich in history, too complex in culture, too compelling to avoid. And I’m not convinced that the rumours of crime haven’t been exaggerated. “We must walk to a taxi rank twenty minutes away,” Themba says. “This is how we walk. We go single file and we walk quickly. I am first; Ruth, you are second and you are never more than a pace behind me. You are third,” he points to David, “and Bongoni walks behind. Did you bring a camera?” “No,” David says, “you asked us not to.” The tension in his eyes releases, slightly. “Your pockets are flat? No jewelry? No bag or purse? Good. Keep your hands swinging at your sides. You might need to use them. We’re going through the market. Your yellow hair – ” He looks at me and shakes his head. “– you are too noticeable.” University of Alberta, Faculty of Arts