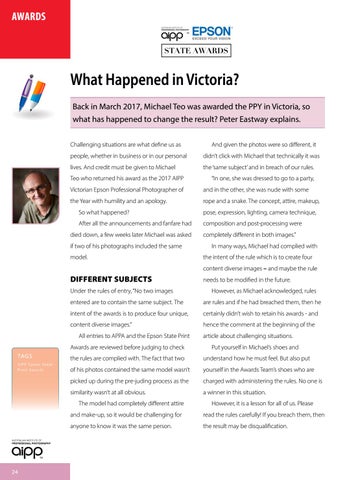 What Happened in Victoria? Back in March 2017, Michael Teo was awarded the PPY in Victoria, so what has happened to change the result? Peter Eastway explains. Challenging situations are what define us as

And given the photos were so different, it

people, whether in business or in our personal

lives. And credit must be given to Michael

the ‘same subject’ and in breach of our rules.

Teo who returned his award as the 2017 AIPP

and in the other, she was nude with some

the Year with humility and an apology.

rope and a snake. The concept, attire, makeup,

After all the announcements and fanfare had

composition and post-processing were

“In one, she was dressed to go to a party,

died down, a few weeks later Michael was asked

completely different in both images.”

if two of his photographs included the same

the intent of the rule which is to create four

In many ways, Michael had complied with

needs to be modified in the future.

Under the rules of entry, “No two images

entered are to contain the same subject. The

are rules and if he had breached them, then he

intent of the awards is to produce four unique,

certainly didn’t wish to retain his awards - and

All entries to APPA and the Epson State Print

However, as Michael acknowledged, rules

Awards are reviewed before judging to check

the rules are complied with. The fact that two

understand how he must feel. But also put

of his photos contained the same model wasn’t

yourself in the Awards Team’s shoes who are

picked up during the pre-juding process as the

charged with administering the rules. No one is

similarity wasn’t at all obvious.

a winner in this situation.

The model had completely different attire

Put yourself in Michael’s shoes and

However, it is a lesson for all of us. Please

and make-up, so it would be challenging for

read the rules carefully! If you breach them, then

anyone to know it was the same person.

the result may be disqualification.

The official publication of the Australian Institute of Professional Photography. 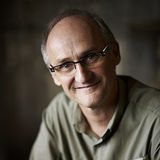