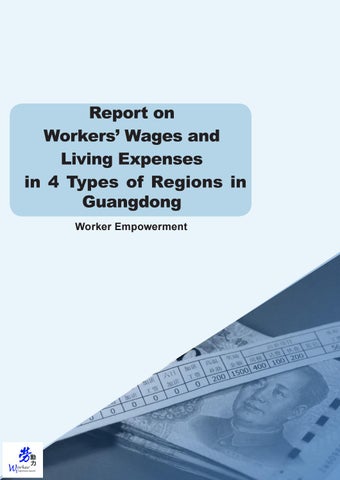 Report on Workersâ&amp;#x20AC;&amp;#x2122; Wages and Living Expenses in 4 Types of Regions in Guangdong Worker Empowerment

Introduction Minimum wage is a reference for adjustment of workers’ basic salary, and an important protection for the livelihood of grassroots workers. In April 2017, we were aware that the Guangdong government was planning to freeze the minimum wage for the third year1. A few months later, 22 regions in Mainland China announced increase of minimum wage standards in 2017. By the end of 2017, minimum wage in Shenzhen, Shanghai, Beijing, Tianjin and Zhejiang was over RMB2,000, leading the country’s standard 2. Meanwhile, minimum wage was not adjusted in the last 3 years in Guangdong, and the standard was below RMB2,000 even in the province’s most advanced city Guangzhou. We were deeply concerned with how the minimum wage standard in Guangdong would affect the livelihood of workers in the region. A research was launched in late 2017 to investigate the freeze of minimum wage by the Guangdong government, and to make our policy recommendations. Samples were taken from 4 types of regions from Guangdong during September to November 2017, including Type 1 region Guangzhou (present minimum wage RMB1,895), Type 2 region Dongguan (present minimum wage RMB1,510), Type 3 region Huizhou (present minimum standard RMB1,350) and Type 4 region Heyuan (present minimum standard RMB1,210). Questionnaire survey on workers’ wages and expenditures were conducted. The results were used to analyze and assess gaps between wages and actual living expenditures among workers in different cities in Guangdong. We also invited workers living in urban areas to record their expenditure for one month, to unfold the daily expenses of workers’ in real life. An on-site price recording was also made to estimate workers’ consumption needs and expenditure. Research methodologies used in our 2013 and 2015 researches were adopted 3. When using the methods of questionnaire survey and workers’ expenditure recording, daily expenses were categorized into 8 groups. Reference was taken from Research on Minimum Standard in Guangdong Province 4, and residence’s non-productive expenditure was categorized into 8 groups: food, clothing, shelter, miscellaneous commodities and services, household items and services, transportation and telecommunication, medical and health, and entertainment, education and cultural services. These groups of expenditures correspond to three levels of living standards: Subsistance Basic Living Development

and and and Medical and health, enterand tainment, education and cultural services

Table 1: 8 groups of residential expenditures under the 3 level of living standards

Research findings Research on wages and expenditures in 4 types of regions in Guangdong provided the following findings:

1. Compared to average standards, income of the workers in the research was obviously lower When only basic salary was considered (excluding overtime payment and extra subsidies), average monthly income of most of the workers was less than 40% of average social wage. When overtime payment and subsidies were taken into consideration, their income would be above 60% of average social wage. Location

2. Serious imbalance in expenditure: low subsistence expenditure, high cost of development needs The workers were saving every bit from their daily expenses to maintain their living. The research found that the workers spent RMB1,015 in average on survival need items such as food, clothing and shelter. When expenditures on other items were added, the average monthly expenses would be as high as RMB3,073.

Food took up a considerable proportion of workers’ daily expenditures. Cheap but

ill-furnished makeshift housing saved their rents and utilities while sacrificing living standards. They seldom bought new clothes, and controlled expenses on household items, leisure and entertainment. Considerable number of workers had no expenses on transport, as they communed on foot and did not use transportations. Most of the workers did not have budget or opportunity for education or self-enhancement. Location

Table 4: Expenses on food, shelter, clothing and utilities in 4 regions in Guangzhou

Though workers’ income is higher than the needs of subsistence and basic living, they are accustomed to satisfying these needs with minimal expenditure. With regard to food, clothing and shelter, their living standards were lower than desirable standards. On the other hand, workers’ expenses to satisfy development needs were twice as that of subsistence needs, especially on medical expenses and support to family members. To catch up with social development, workers with low income have to sacrifice their quality of subsistence living and cut related expenses to meet developmental needs of the family. Location

3. Similar daily expenses despite disparity of workers’ income across regions From the statistics, it could be observed that workers’ income and social security were of higher level in Type 1 region, while in Type 4 region, the average income was the lowest and the coverage rate of social security was also the lowest. However, only small difference is observed in their spending. Most of the workers saved expenses on food, clothing and shelter, and were more relax with expenditures on children and older parents. The average spending on supporting family members among the 4 regions was more than RMB1,000 per month, while it reached RMB2,000 in Huizhou.

living standard. According to their record on expenditure, workers have to spend more than RMB3,000 if they lived with their families in the city, while most of the expenses was on supporting the family. As gaps of living standards between cities are narrowing, workers have to shoulder bigger burden. For example, it could be observed from the prices index that differences in expenses on food, clothing and shelter between Guangzhou and Dongguan were very small. In our investigation on workersâ&amp;#x20AC;&amp;#x2122; daily expenses on food, clothing and shelter, differences in average consumption between the four cities were less than RMB100, except a few cases. In other words, there were variation in price level and living standards between cities in Guangdong, but the difference was small. Location

4. Social security unable to support workers, personal saving varied among workers There was no full social security coverage in all 4 regions. Due to insufficiency in workersâ&amp;#x20AC;&amp;#x2122; social security, they have to bear most of the expenses. We can observe from workersâ&amp;#x20AC;&amp;#x2122; daily expenses that Mainland China is still a traditional society that families are the main source of help and elderly support. Workforce of the families joined the labour market and spent most of their income to support their children, parents and their personal developmental needs. Location

The amount of personal saving is related to age and consumption habits. The average age of workers from the four cities covered by this research varied. The workers in Huizhou were older in general and many of them were over 40 years old, while workers in Heyuan were younger and mostly under 30. Among workers in these 4 cities, Huizhou workers spent most of their income on medical and health, and supporting their families, and they were saving the most as well. On the other hand, workers from Heyuan were the youngest, their average spending on entertainment was the highest among the workers in 4 cities, and they were spending the least on supporting their families and saving. Due to insufficient social protection, in case workers have illness or accidents, they would have heavy financial burden.

2. The minimum wage would not be lower than 40% of average social wage The present minimum wage standard in Guangdong is far below the actual needs of the workers, its meaning as a reference to workers’ income has changed. We propose that minimum wage has to go back to the right track and its bottom line should be 40% of average social wage, to acknowledge that low-income workers should also share the results of economic achievements in Guangdong. Despite differences between the regions, it should be a protection of workers’ minimum income standard.

About Worker Empowerment: Worker Empowerment (WE) is a Hong Kong-based labour organization which concerns labour rights in China. The mission of WE is to strengthen workers, particularly migrant workers, to reclaim labour rights and decent jobs. Adopting a community approach, WE supports workers through actions including workers outreach and providing legal advice. This is achieved by developing long-term supportive partnership with local community-based worker centers in the Pearl River Delta Region. WE also emphasizes the importance of research and policy advocacy. Having published research reports on employment difficulties, minimum wage and the Labour Contract Law, WE sustains the role as an monitor and advocate in Chinese labour policies. For inquiry please contact us through email: workerempowerment@gmail.com

A part of WE's long-term inquiry on the effectiveness of China's minimum wage policies. Focusing on the Guangdong Province in south China, the report had compiled the prices of daily necessities, wage levels, overtime hours and social insurance, in order to provide a brief picture on the income/expenditure composition of ordinary workers' families. This is used to further examine the extent in which workers' lives were helped by the minimum wage level. 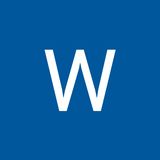