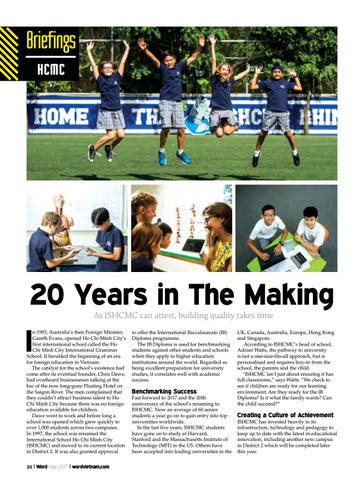 20 Years in The Making As ISHCMC can attest, building quality takes time

n 1993, Australia’s then Foreign Minister, Gareth Evans, opened Ho Chi Minh City’s first international school called the Ho Chi Minh City International Grammar School. It heralded the beginning of an era for foreign education in Vietnam. The catalyst for the school’s existence had come after its eventual founder, Chris Dawe, had overheard businessmen talking at the bar of the now long-gone Floating Hotel on the Saigon River. The men complained that they couldn’t attract business talent to Ho Chi Minh City because there was no foreign education available for children. Dawe went to work and before long a school was opened which grew quickly to over 1,000 students across two campuses. In 1997, the school was renamed the International School Ho Chi Minh City (ISHCMC) and moved to its current location in District 2. It was also granted approval

to offer the International Baccalaureate (IB) Diploma programme. The IB Diploma is used for benchmarking students against other students and schools when they apply to higher education institutions around the world. Regarded as being excellent preparation for university studies, it correlates well with academic success.

Benchmarking Success Fast forward to 2017 and the 20th anniversary of the school’s renaming to ISHCMC. Now an average of 60 senior students a year go on to gain entry into top universities worldwide. In the last five years, ISHCMC students have gone on to study at Harvard, Stanford and the Massachusetts Institute of Technology (MIT) in the US. Others have been accepted into leading universities in the

UK, Canada, Australia, Europe, Hong Kong and Singapore. According to ISHCMC’s head of school, Adrian Watts, the pathway to university is not a one-size-fits-all approach, but is personalised and requires buy-in from the school, the parents and the child. “ISHCMC isn’t just about ensuring it has full classrooms,” says Watts. “We check to see if children are ready for our learning environment. Are they ready for the IB Diploma? Is it what the family wants? Can the child succeed?”

Creating a Culture of Achievement ISHCMC has invested heavily in its infrastructure, technology and pedagogy to keep up to date with the latest in educational innovation, including another new campus in District 2 which will be completed later this year. 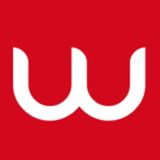 Everything you need to know about Vietnam and a little bit more. This month: Vietnam past, present and future

Everything you need to know about Vietnam and a little bit more. This month: Vietnam past, present and future