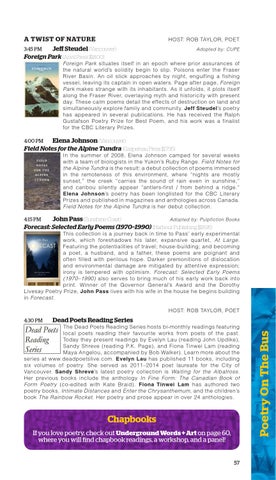 Foreign Park situates itself in an epoch where prior assurances of the natural world’s solidity begin to slip. Poisons enter the Fraser River Basin. An oil slick approaches by night, engulfing a fishing vessel, leaving its captain in open waters. Page after page, Foreign Park makes strange with its inhabitants. As it unfolds, it plots itself along the Fraser River, overlaying myth and historicity with present day. These calm poems detail the effects of destruction on land and simultaneously explore family and community. Jeff Steudel’s poetry has appeared in several publications. He has received the Ralph Gustafson Poetry Prize for Best Poem, and his work was a finalist for the CBC Literary Prizes.

In the summer of 2008, Elena Johnson camped for several weeks with a team of biologists in the Yukon’s Ruby Range. Field Notes for the Alpine Tundra is the result: a debut collection of poems immersed in the remoteness of this environment, where “nights are mostly sunset,” the creek “carries the sound of rain even in sunshine,” and caribou silently appear “antlers-first / from behind a ridge.” Elena Johnson’s poetry has been longlisted for the CBC Literary Prizes and published in magazines and anthologies across Canada. Field Notes for the Alpine Tundra is her debut collection.

This collection is a journey back in time to Pass’ early experimental work, which foreshadows his later, expansive quartet, At Large. FORECAST Featuring the potentialities of travel; house-building; and becoming a poet, a husband, and a father, these poems are poignant and often filled with perilous hope. Darker premonitions of dislocation and environmental damage are mitigated by attentive expression; irony is tempered with optimism. Forecast: Selected Early Poems (1970–1990) also serves to bring much of his early work back into print. Winner of the Governor General’s Award and the Dorothy Livesay Poetry Prize, John Pass lives with his wife in the house he begins building in Forecast. John Pass

The Dead Poets Reading Series hosts bi-monthly readings featuring local poets reading their favourite works from poets of the past. Today they present readings by Evelyn Lau (reading John Updike), Sandy Shreve (reading P.K. Page), and Fiona Tinwei Lam (reading Maya Angelou, accompanied by Bob Walker). Learn more about the series at www.deadpoetslive.com. Evelyn Lau has published 11 books, including six volumes of poetry. She served as 2011–2014 poet laureate for the City of Vancouver. Sandy Shreve’s latest poetry collection is Waiting for the Albatross. Her previous books include the anthology In Fine Form: The Canadian Book of Form Poetry (co-edited with Kate Braid). Fiona Tinwei Lam has authored two poetry books, Intimate Distances and Enter the Chrysanthemum, and the children’s book The Rainbow Rocket. Her poetry and prose appear in over 24 anthologies.

Chapbooks If you love poetry, check out Underground Words + Art on page 60, where you will find chapbook readings, a workshop, and a panel! 57

Poetry On The Bus

Word Vancouver is Western Canada's largest celebration of literacy and reading. The festival takes place during the last week of September: September 23–27, 2015.