The Race for the Cape 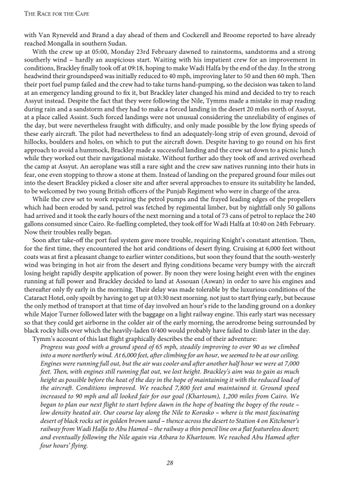 THE RACE FOR THE CAPE with Van Ryneveld and Brand a day ahead of them and Cockerell and Broome reported to have already reached Mongalla in southern Sudan. With the crew up at 05:00, Monday 23rd February dawned to rainstorms, sandstorms and a strong southerly wind – hardly an auspicious start. Waiting with his impatient crew for an improvement in conditions, Brackley finally took off at 09:18, hoping to make Wadi Halfa by the end of the day. In the strong headwind their groundspeed was initially reduced to 40 mph, improving later to 50 and then 60 mph. Then their port fuel pump failed and the crew had to take turns hand-pumping, so the decision was taken to land at an emergency landing ground to fix it, but Brackley later changed his mind and decided to try to reach Assyut instead. Despite the fact that they were following the Nile, Tymms made a mistake in map reading during rain and a sandstorm and they had to make a forced landing in the desert 20 miles north of Assyut, at a place called Assint. Such forced landings were not unusual considering the unreliability of engines of the day, but were nevertheless fraught with difficulty, and only made possible by the low flying speeds of these early aircraft. The pilot had nevertheless to find an adequately-long strip of even ground, devoid of hillocks, boulders and holes, on which to put the aircraft down. Despite having to go round on his first approach to avoid a hummock, Brackley made a successful landing and the crew sat down to a picnic lunch while they worked out their navigational mistake. Without further ado they took off and arrived overhead the camp at Assyut. An aeroplane was still a rare sight and the crew saw natives running into their huts in fear, one even stopping to throw a stone at them. Instead of landing on the prepared ground four miles out into the desert Brackley picked a closer site and after several approaches to ensure its suitability he landed, to be welcomed by two young British officers of the Punjab Regiment who were in charge of the area. While the crew set to work repairing the petrol pumps and the frayed leading edges of the propellers which had been eroded by sand, petrol was fetched by regimental limber, but by nightfall only 50 gallons had arrived and it took the early hours of the next morning and a total of 73 cans of petrol to replace the 240 gallons consumed since Cairo. Re-fuelling completed, they took off for Wadi Halfa at 10:40 on 24th February. Now their troubles really began. Soon after take-off the port fuel system gave more trouble, requiring Knight’s constant attention. Then, for the first time, they encountered the hot arid conditions of desert flying. Cruising at 6,000 feet without coats was at first a pleasant change to earlier winter conditions, but soon they found that the south-westerly wind was bringing in hot air from the desert and flying conditions became very bumpy with the aircraft losing height rapidly despite application of power. By noon they were losing height even with the engines running at full power and Brackley decided to land at Assouan (Aswan) in order to save his engines and thereafter only fly early in the morning. Their delay was made tolerable by the luxurious conditions of the Cataract Hotel, only spoilt by having to get up at 03:30 next morning. not just to start flying early, but because the only method of transport at that time of day involved an hour’s ride to the landing ground on a donkey while Major Turner followed later with the baggage on a light railway engine. This early start was necessary so that they could get airborne in the colder air of the early morning, the aerodrome being surrounded by black rocky hills over which the heavily-laden 0/400 would probably have failed to climb later in the day. Tymm’s account of this last flight graphically describes the end of their adventure: Progress was good with a ground speed of 65 mph, steadily improving to over 90 as we climbed into a more northerly wind. At 6,000 feet, after climbing for an hour, we seemed to be at our ceiling. Engines were running full out, but the air was cooler and after another half hour we were at 7,000 feet. Then, with engines still running flat out, we lost height. Brackley’s aim was to gain as much height as possible before the heat of the day in the hope of maintaining it with the reduced load of the aircraft. Conditions improved. We reached 7,800 feet and maintained it. Ground speed increased to 90 mph and all looked fair for our goal (Khartoum), 1,200 miles from Cairo. We began to plan our next flight to start before dawn in the hope of beating the bogey of the route – low density heated air. Our course lay along the Nile to Korosko – where is the most fascinating desert of black rocks set in golden brown sand – thence across the desert to Station 4 on Kitchener’s railway from Wadi Halfa to Abu Hamed – the railway a thin pencil line on a flat featureless desert; and eventually following the Nile again via Atbara to Khartoum. We reached Abu Hamed after four hours’ flying. 28

The Race for the Cape

For the first time Martin Barraclough tells the complete story how, throughout the past century, and first decade of the 2000s, British and South African pilots conquered the air routes from London to Cape Town with ever-increasing speeds. His history starts in 1920 with the creation by the Royal Air Force and the colonial administration of forty three landing grounds from Cairo to Cape Town – later known as the Imperial Route – to allow aeroplanes to fly the length of the continent. It closes with the continuing challenge to current aviators to beat the FAI’s class records, or aspire to the ultimate challenge set by Alex Henshaw, one of Britain’s most famous racing and test pilots, of a solo return flight of 10,000 miles over some of the world’s most inhospitable country and through some of the planet’s most hostile weather. In the 1920s and ’30s the route between London and Cape Town was, with the Atlantic crossing and the route to Australia and New Zealand, the proving ground for Br 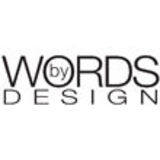