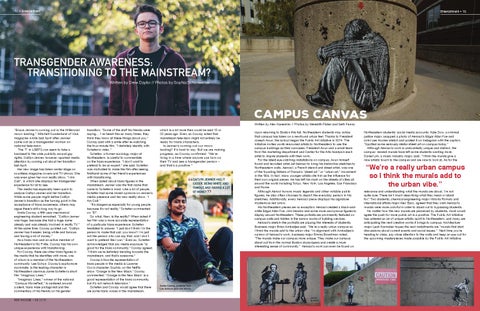 Written by Alex Kaneshiro // Photos by Meredith Fisher and Seth Penna “Bruce Jenner’s coming out is the Millennial moon landing,” Mitchell Sunderland of Vice magazine wrote last April after Jenner came out as a transgender woman on national television. The ‘T’ in LGBTQ can seem to take a backseat to the wide publicity around gay rights. Caitlyn Jenner, however, sparked media attention by coming out about her transition last April. Her new image has taken center stage on countless magazine covers and TV shows. She was even given her own reality show, “I Am Cait”, in which she displays her transgender experience for all to see. The media has especially been quick to analyze Caitlyn Jenner and her transition. While some people might define Caitlyn Jenner’s transition as the turning point in the acceptance of trans awareness, others may argue there’s still a long way to go. Amila Cooray, a fifth year mechanical engineering student remarked, “Caitlyn Jenner was huge, because she had a huge name already and was already involved in reality TV.” At the same time, Cooray pointed out, “Caitlyn Jenner has it easier, being white and famous and having a lot of money.” As a trans man and an active member of Northeastern’s NU Pride, Cooray has his own unique experience with transitioning. For Cooray, there are other trans figures in the media that he identifies with more, one of whom is a member of the Northeastern community: Lee Schun. Cooray’s sophomore roommate, is the leading character in Northeastern alumnus Jamie Schefen’s short film “Imaginary Lines.” “Imaginary Lines,” winner of the national “Campus MovieFest,” is centered around a silent, trans male protagonist and the commentary of his friends on his gender WOOF MAGAZINE • fall 2015

transition. “Some of the stuff his friends were saying… I’ve heard this so many times, they think they know all these things about you,” Cooray said with a smile after re-watching the four-minute film. “I definitely identify with Schefen’s video.” Schefen, a former sociology major at Northeastern, is careful to commentate on the trans experience. “I don’t want to pretend to be an expert,” she said. Schefen was motivated to make the film after seeing firsthand some of her friend’s experiences with transitioning. When asked about trans figures in the mainstream, Jenner was the first name that came to Schefen’s mind. Like a lot of people, Schefen had some mixed opinions on Jenner’s media presence and her new reality show, “I Am Cait.” “It’s dangerous especially for young people, because it’s not reality,” Schefen commented on “E!”. So what, then, is the reality? When asked if her film was a more accurate representation of a particular trans experience, Schefen hesitated to answer. “I just don’t think I’m the person to make that call, you know? I’m just not the person who can say that, and I don’t want to pretend like I can.” Even so, Schefen acknowledged that any media exposure “is good for the trans community.” Cooray agreed. “I think we’re definitely trending towards the mainstream, and that’s awesome.” Cooray’s favorite representation of trans people in the media is Laverne Cox’s character, Sophia, on the Netflix show “Orange Is the New Black.” Cooray commented,“‘Orange Is the New Black’ is a good representation of the trans community, but it’s not network television.” Schefen and Cooray would agree that there are some trans voices in the mainstream,

which is a lot more then could be said 15 or 20 years ago. Even, so Cooray noted that mainstream television might not entirely be ready for trans characters. Is Jenner’s coming out our moon landing? It’s hard to say. But we are making progress, as Cooray confirmed: “We’re living in a time where anyone can turn on their TV and see a transgender person – and that’s a positive.”

Upon returning to Boston this fall, Northeastern students may notice that campus has taken on a newfound urban feel. Thanks to President Joseph Aoun, the school began the Public Art Initiative in 2014. The Initiative invites world-renowned artists to Northeastern to use the campus buildings as their canvases. President Aoun and a small team from the marketing department and Center for the Arts handpick each artist to inspire students with their work. For the latest eye-catching installations on campus, Aoun himself found and recruited artist Jef Aérosol to bring his distinctive sketches to Northeastern walls. Aérosol, a French stencil and street artist, was one of the founding fathers of France’s “street art,” or “urban art,” movement in the ‘80s. In fact, many younger artists cite him as the influence for their own original pieces. He has left his mark on the streets of cities all around the world including Tokyo, New York, Los Angeles, San Francisco and Rome. Although Aérool honors music legends and other notable public figures, he also often chooses to depict the everyday person in his sketches. Additionally, every Aérosol piece displays his signature mysterious red arrow. His Northeastern pieces are no exception. Aérosol created a black-andwhite Edgar Allan Poe, Jimi Hendrix and some more anonymous figures to display around Northeastern. These portraits are prominently featured on campus walls and hidden in the narrow nooks of building crevices. Aérosol’s sketch-like portraits are piquing the interests of students. Business major Brian Ambadjes said, “We’re a really urban campus so I think the murals add to the urban vibe.” In alignment with Ambadjes’s opinion of Aérosol’s work, business major Emma Boardman noted, “The murals make our campus more unique. They make our campus stand out from the normal Boston skyscrapers and create a more interesting sense of community.” Aérosol’s work can even be found on

Northeastern students’ social media accounts. Kate Dow, a criminal justice major, snapped a photo of Aérosol’s Edgar Allan Poe and John Lee Hooker sketch and posted it on Instagram with the caption, “Spotted some seriously stellar street art on campus today.” Although Aérosol’s work is undoubtedly unique and distinct, the campus’ newest murals have left some students wanting more. Daniel Lim, a music industry major, said, “I think the murals give a nice artistic touch to the campus and are nice to look at. As for the

“We’re a really urban campus so I think the murals add to the urban vibe.”

relevance and understanding what the murals are about, I’m not quite sure. There isn’t much describing what they mean or stand for.” Two students, chemical engineering major Victoria Romulo and international affairs major Alex Esco, agreed that they wish Aérosol’s murals were more colorful in order to stand out to bypassing students. No matter how the new murals are perceived by students, most would agree the push for more public art is a positive. The Public Art Initiative has ushered an air of unique artistic spirit to Northeastern, and many are anticipating the next creative works it brings to campus. Architecture major Leah Karmaker hopes the next installments are “murals that start discussions about current events and social issues.” Next time you’re heading to class, pay close attention to the walls and keep an eye out for the upcoming masterpieces made possible by the Public Art Initiative.