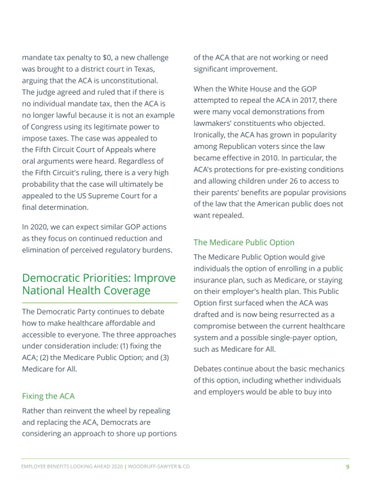 of the ACA that are not working or need

was brought to a district court in Texas,

arguing that the ACA is unconstitutional. The judge agreed and ruled that if there is no individual mandate tax, then the ACA is no longer lawful because it is not an example of Congress using its legitimate power to impose taxes. The case was appealed to the Fifth Circuit Court of Appeals where oral arguments were heard. Regardless of the Fifth Circuit's ruling, there is a very high probability that the case will ultimately be appealed to the US Supreme Court for a final determination.

When the White House and the GOP attempted to repeal the ACA in 2017, there were many vocal demonstrations from lawmakers' constituents who objected. Ironically, the ACA has grown in popularity among Republican voters since the law became effective in 2010. In particular, the ACA's protections for pre-existing conditions and allowing children under 26 to access to their parents' benefits are popular provisions of the law that the American public does not want repealed.

In 2020, we can expect similar GOP actions as they focus on continued reduction and elimination of perceived regulatory burdens.

Democratic Priorities: Improve National Health Coverage The Democratic Party continues to debate how to make healthcare affordable and accessible to everyone. The three approaches under consideration include: (1) fixing the ACA; (2) the Medicare Public Option; and (3) Medicare for All.

The Medicare Public Option The Medicare Public Option would give individuals the option of enrolling in a public insurance plan, such as Medicare, or staying on their employer's health plan. This Public Option first surfaced when the ACA was drafted and is now being resurrected as a compromise between the current healthcare system and a possible single-payer option, such as Medicare for All. Debates continue about the basic mechanics of this option, including whether individuals

and employers would be able to buy into

Rather than reinvent the wheel by repealing and replacing the ACA, Democrats are considering an approach to shore up portions