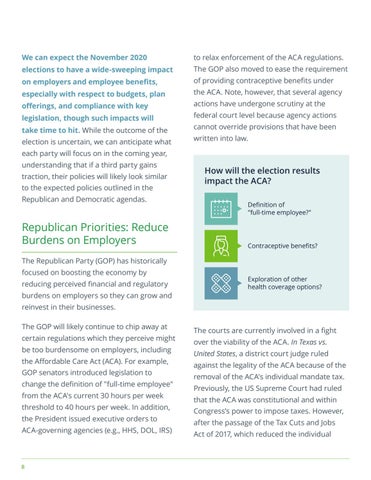 We can expect the November 2020

to relax enforcement of the ACA regulations.

elections to have a wide-sweeping impact

The GOP also moved to ease the requirement

on employers and employee benefits,

of providing contraceptive benefits under

especially with respect to budgets, plan

the ACA. Note, however, that several agency

offerings, and compliance with key legislation, though such impacts will take time to hit. While the outcome of the election is uncertain, we can anticipate what

actions have undergone scrutiny at the federal court level because agency actions cannot override provisions that have been written into law.

each party will focus on in the coming year, understanding that if a third party gains traction, their policies will likely look similar to the expected policies outlined in the Republican and Democratic agendas.

How will the election results impact the ACA? Deﬁnition of "full-time employee?"

Exploration of other health coverage options?

reinvest in their businesses. The GOP will likely continue to chip away at certain regulations which they perceive might be too burdensome on employers, including the Affordable Care Act (ACA). For example, GOP senators introduced legislation to change the definition of "full-time employee" from the ACA's current 30 hours per week threshold to 40 hours per week. In addition, the President issued executive orders to ACA-governing agencies (e.g., HHS, DOL, IRS)

The courts are currently involved in a fight over the viability of the ACA. In Texas vs. United States, a district court judge ruled against the legality of the ACA because of the removal of the ACA's individual mandate tax. Previously, the US Supreme Court had ruled that the ACA was constitutional and within Congress’s power to impose taxes. However, after the passage of the Tax Cuts and Jobs Act of 2017, which reduced the individual