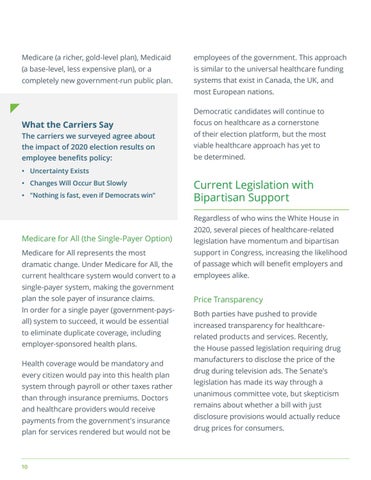 employees of the government. This approach

(a base-level, less expensive plan), or a

is similar to the universal healthcare funding

systems that exist in Canada, the UK, and most European nations. Democratic candidates will continue to

What the Carriers Say

focus on healthcare as a cornerstone

The carriers we surveyed agree about the impact of 2020 election results on employee benefits policy:

viable healthcare approach has yet to

of their election platform, but the most be determined.

Medicare for All (the Single-Payer Option)

2020, several pieces of healthcare-related legislation have momentum and bipartisan

Medicare for All represents the most

support in Congress, increasing the likelihood

dramatic change. Under Medicare for All, the

of passage which will benefit employers and

current healthcare system would convert to a

single-payer system, making the government plan the sole payer of insurance claims. In order for a single payer (government-paysall) system to succeed, it would be essential to eliminate duplicate coverage, including employer-sponsored health plans. Health coverage would be mandatory and every citizen would pay into this health plan system through payroll or other taxes rather than through insurance premiums. Doctors and healthcare providers would receive payments from the government's insurance plan for services rendered but would not be

Price Transparency Both parties have pushed to provide increased transparency for healthcarerelated products and services. Recently, the House passed legislation requiring drug manufacturers to disclose the price of the drug during television ads. The Senate's legislation has made its way through a unanimous committee vote, but skepticism remains about whether a bill with just disclosure provisions would actually reduce drug prices for consumers.