Raiders of the Lost Ark In Concert

WELCOME WHO WE ARE

The Cynthia Woods Mitchell Pavilion presented by Huntsman is operated by The Center for the Performing Arts at The Woodlands, a nonprofit 501(c)(3) organization dedicated to the cultural enrichment of the community.

To provide educational programs about the performing arts; to provide training and performance opportunities for young artists; to be a catalyst for new audiences and enhance appreciation for the arts; and, to present a diverse offering of performing arts.

Welcome to The Cynthia Woods Mitchell Pavilion! We are so excited to be welcoming back the

Share your photos, posts and tweets with us tonight using #PavilionArts2019.

Houston Symphony to the Main Stage for Raiders of the Lost Ark In Concert this evening. Thank you for joining us as this special event is a great way to introduce children of all ages to the performing

THE CYNTHIA WOODS MITCHELL PAVILION BOARD OF DIRECTORS

arts. Every scene of the movie's legendary score will be enriched with the sounds of the Symphony as the full movie plays on the big screens. The Houston Symphony will return to the Main Stage on Wednesday, September 11 at A Symphony of Heroes, an inspiring evening honoring the real superheroes we meet every day- first responders, military and more. It is important for a community to come together on a day of remembrance like this day and there is no better way to do so than to enjoy the beautiful ensemble while we pay our respects. We have a great lineup of events this fall so be sure to add them to your calendars. On Friday, October 18, everyone is encouraged to dress up in their Halloween costume for a chance to walk on stage during one of the most popular concerts we present each year, Hocus Pocus Pops. In November, we will be presenting our 24th Annual Children's Festival, presented by ExxonMobil. At the two-day festival, attendees can watch live performers, meet and greet a variety of characters and partake in plenty of exciting adventures throughout the entire venue. Then, on December 5, we will welcome local high school musicians and the Sam Houston State University Orchestra and Choir for the always exciting and free kick-off to the holiday season, Holly Jolly Jingle. As a reminder, all of our performing arts events offer free lawn and mezzanine seating. Bring your

family, friends and neighbors to The Pavilion and experience the arts under the stars this season.

See you on the hill.

Tonight's program is a presentation of the complete film Raiders of the Lost Ark with a live performance of the film's entire score, including music played by the orchestra during the end credits. Out of respect for the musicians and your fellow audience members, please remain seated until the conclusion of the credits. "RAIDERS OF THE LOST ARK" Licensed by LUCASFILM LTD and PARAMOUNT PICTURES. This program licensed by LUCASFILM LTD and PARAMOUNT PICTURES. Motion Picture, Artwork, Photos ©1981 Lucasfilm Ltd. All Rights Reserved. MUSIC COMPOSED BY JOHN WILLIAMS BANTHA MUSIC (BMI) MUSICAL SCORE LICENSED BY BANTHA MUSIC C/O WALT DISNEY MUSIC COMPANY. © ALL RIGHTS RESERVED. USED BY PERMISSION.

In the 2019-20 season, Jason Seber begins his fourth year with the Kansas City Symphony, where he has served as assistant conductor (2016-17) and associate conductor (2017 to present). In this position, he has built a strong rapport with the Kansas City community, leading the Symphony in more than 70 concerts each season on the Classics Uncorked, Pops, Family, Film + Live Orchestra, Young People's Concerts, KinderKonzerts, and Link Up series as well as Christmas Festival, Symphony in the Flint Hills, and a multitude of other programs. In October, he makes his Kansas City Symphony Classical Series debut. Prior to his appointment in Kansas City, Jason served as education conductor of the Louisville Orchestra (2013-2016), creating and leading many programs on the education, family, holiday, pops and Music Without Borders series. He was also music director of the Louisville Youth Orchestra (LYO) (2005-2016). Under his baton, the LYO performed on NPR's From the Top and gave regional premieres of works by Joan Tower, Joseph Schwantner, and Christopher Theofanidis. Previously, Jason served as assistant conductor of the Cleveland Pops Orchestra and the National Repertory Orchestra. He has guest conducted this orchestra and others in Charleston, Colorado, Indianapolis, Washington, St. Louis, and Windsor, as well as the Cleveland Pops and Denver Young Artists Orchestra. This summer, he leads performances with the National Repertory Orchestra, Cleveland Pops, and the Honors Performance Series at Royal Festival Hall in London. A passionate advocate of music education, he conducted the Honors Performance Series at the Sydney Opera House (2017) and Carnegie Hall (2018). In 2020, he conducts the Missouri All-State Orchestra. Jason has performed with a diverse range of artists, including Patti Austin, Andrew Bird, Boyz II Men, Jinjoo Cho, Melissa Etheridge, Ben Folds, Lyle Lovett, Brian Stokes Mitchell, My Morning Jacket, Leslie Odom Jr., Aoife O'Donovan, Pink Martini, Doc Severinsen, Conrad Tao, Bobby Watson, Wynonna, and Joyce Yang. He earned his master's degree in orchestral conducting from the Cleveland Institute of Music and his bachelor's degrees in violin performance and music education from Baldwin Wallace University.

J O H N WILLIAM S , Composer In a career spanning more than five decades, John Williams has become one of America's most accomplished and successful composers for film and for the concert stage, and he remains one of our nation's most distinguished and contributive musical voices. He has composed the music for more than one hundred films, including all eight Star Wars films, the first three Harry Potter films, Superman, Memoirs of a Geisha, Home Alone and The Book Thief. His 45-year artistic partnership with director Steven Spielberg has resulted in many of Hollywood's most acclaimed and successful films, including Schindler's List, E.T. the Extra-Terrestrial, Jaws, Jurassic Park, Close Encounters of the Third Kind, the Indiana Jones films, Saving Private Ryan Lincoln, The BFG and The Post. Mr. Williams has composed themes for four Olympic Games. He served as music director of the Boston Pops Orchestra for fourteen seasons and remains their Laureate Conductor. He has composed numerous works for the concert stage including two symphonies, and concertos commissioned by many of America's most prominent orchestras. Mr. Williams has received five Academy Awards and 51 Oscar nominations (making him the second-most nominated person in the history of the Oscars), seven British Academy Awards, twenty-three Grammys, four Golden Globes, and five Emmys. In 2016 he received the 44th Life Achievement Award from the American Film Institute - the first time a composer was honored with this award.

The Cynthia Woods Mitchell Pavilion acknowledges the financial support of The Woodlands Township that is generated by the Event Admissions Tax for its performing arts and educational programs.

Houston Symphony: A Symphony of Heroes

Zac Brown Band with Lukas Nelson & Promise of the Real

Tickets are available online at www.ticketmaster.com or at The Pavilion Box Office Monday through Friday 10 a.m. - 5 p.m. and on event days through intermission. Showtimes and dates subject to

with epic literacy games, Test your superpowers snag a FREE book learn your hero name and show! before you head to the 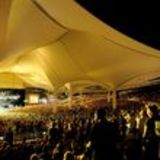 OnStage: Raiders of the Lost Ark in Concert

OnStage: Raiders of the Lost Ark in Concert