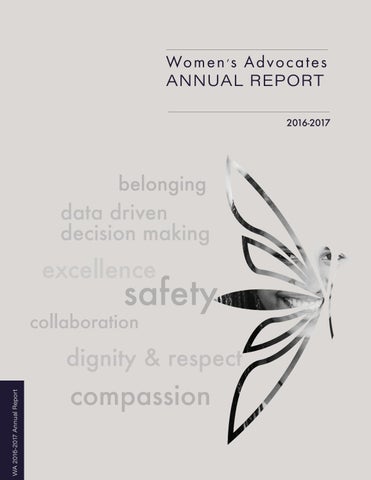 Dear Friends and Supporters, Warm greetings from 588 Grand, the home of Women’s Advocates since 1974! The past year has been an eventful one for our organization and for me personally, as I had the privilege of joining this remarkable team. It is humbling to lead an organization that has been on the vanguard of the movement to end domestic violence from the very beginning. I hope that by exploring this document, you’ll learn something new about the work of Women’s Advocates, be moved by the stories of the women and families whose lives we touch, and feel inspired to continue your important work to end domestic violence. Because our partnership with you is what makes our work possible. Together, we provide women and children support for the journey to wholeness and a new chapter. Together, we walk with survivors as they heal. Your support gives us the strength to do our work. You give us hope. In the words of American composer Ysaye Barnwell, “If we want hope to survive in this world today, then every day we’ve got to pray on, teach on, work on, march on, sing on.” Thanks to you, we march on. With gratitude,

The mission of Women's Advocates is to eliminate violence in the lives of women, children and families.

140 women and 184 children received shelter at Women’s Advocates. “He took EVERYTHING. So I survived. I let him keep the broken pieces of me. I grew away from my shattered body through forgiveness, self-love, sobriety, god, and honesty. I have become the author of my story. This is my surviving journey. You, too, can thrive and strive to make a difference. So reach out, speak up, create from a place of understanding. Let’s help each other.” – 2017 Resident

SHELTER Womenâ&#x20AC;&#x2122;s Advocates opened its doors in 1974 as the first shelter in the nation for women escaping domestic violence. Located in Saint Paul, Womenâ&#x20AC;&#x2122;s Advocates provides shelter for women and children escaping domestic violence in a secure location with round-theclock staff support available to residents. Sheltering up to 50 women and children daily, residents have a bedroom, home amenities, and a full service kitchen serving three meals a day. The shelter is also home to the Women's Program and the Sheila Wellstone Children's Program. Women's Advocates welcomes domestic violence survivors of all backgrounds and cultures. Our shelter is a safe place where women and families can build pathways towards safety and stability. Situated in three houses in the Summit Hill neighborhood, our shelter is a critical public safety resource in our community.

On average, women and children spend 45 days at Women's Advocates.

"I have been lost for some time. My life had not been mine or what I thought needed it to be. I came to Women's Advocates with nothing but hope that a turnaround would follow. I may be a work in progress but I have belief that the best is yet to come. My growth is evident and patience is a virtue. I thank all the compassionate hands that have helped me get to this mindset thus far." - 2017 Resident

WOMEN'S PROGRAM The Womenâ&#x20AC;&#x2122;s Program works intensively with women residing at our shelter. Our program aims to create a safety plan and pathway to independence for each woman as she plans for a stable and violence-free future for herself, and in many cases, her children. When a woman arrives at our shelter, one of our trained advocates works with her to create an individualized safety plan and begin the pathway to a violence-free life. Women's programming includes access to on-site, one-on-one mental health counseling from a licensed therapist, legal support from volunteer lawyers on-site, systems navigation for courts-related issues, and connections to housing, education, and employment resources. Our staff offer daily support groups to all residents for peer support, parenting, chemical health, mindfulness, and other topics related to physical, sexual, mental and spiritual health.

On average, a woman will leave an abusive relationship 7 times before she leaves for good. Statistic from "50 Obstacles to Leaving" Austin, TX: The National Domestic Violence Hotline

"I stayed at Women’s Advocates as a kid, which surprises my friends. I didn’t think it was a big deal because it was a good place and I made good memories there. I didn’t realize the reason I was there was because of what was going on at home. Every time I drive by the shelter now I think ‘they were there for me and they’re still there for other people and working really hard with their heart to help people heal.’“ -2005 Child Resident

92% of children at Women's Advocates have experienced domestic violence.

19 women received supportive services and 10 families received rent support from Women's Advocates after leaving the shelter. 2,195 women who called our crisis line received crisis interventions and shelter referrals. 325 referrals to legal, housing and other resources were made to crisis line callers. Aftercare expenses for the 2016-2017 Fiscal Year were $169,205. Aftercare expenses comprised 7% of organizational expenses.

Each woman who leaves our shelter receives a word cloud with positive descriptions of her that staff have observed. This is always a meaningful moment. Says Erin, Housing & Aftercare Advocate, of her work with women once they leave, "to see the women for the first time have keys to a place they can call home is one of the greatest experiences. The pride when I am given a tour of their home and how they plan to decorate, the excitement and joy and the look of relief on the children’s face leaves a strong impression. I feel very fortunate to be a part of these women’s transition and pursuit of a violence-free life."

AFTERCARE Women in our aftercare program have access to our supportive services after moving out of our shelter. Our Housing and Aftercare Advocate visits families in their new homes to ensure they have access to resources so they remain independent and safe. Collaboration with landlords provided a creative approach to connecting 10 exiting families last year to safe housing. A survivor of domestic violence often has the keys to a place she can call her own for the first time after leaving our shelter. Home visits and phone check-ins offer connections to education, employment, and community resources for survivors transitioning into independence and sustained safety. Aftercare services are available for up to a year for women after they leave, and rent support is available for up to two years for a limited number of families after leaving the shelter.

â&#x20AC;&#x153;You gave me courage. I am now giving others a voice. I will not be quiet. I will not stop until they have justice. Thank you for helping me to see that what happened to them was abuse." â&#x20AC;&#x201C; An abuse survivor's parent (whose peers also endured abuse) who attended a Women's Advocates' educational presentation

IMPACT IN THE 2016-2017 FISCAL YEAR Continued shelter and safety 22,014 nights of shelter were provided. 66,042 meals were served. 324 women and children received safe, secure shelter at Women’s Advocates. 100+ Orders for Protection were filed by residents while at the shelter. 70 crisis interventions took place with residents of the shelter. 2,195 people seeking safety from domestic violence got help via our 24/7 Crisis Line. A Resident Council was formed, giving leadership opportunities to women at the shelter. Safer futures for children 148 children participated in healing children’s activities and safety planning. 10 hours per week of children's therapy were added with the arrival of a new therapist. 1,073 hours of care were provided to children, using a childhood development curriculum. Increased community engagement Over $8,000 in gift cards was collected for residents' holiday gifts and move-out kits. 19 families got help with safety, housing, and other needs for a year after leaving the shelter. 1,577 individual visits were made by volunteers to the shelter, averaging 4 volunteers per day. Growth of violence prevention education An Education and Outreach Coordinator joined the team at Women's Advocates. Over 30 schools in the metro area received education and resources on dating violence. Online safety resources were accessed by 3,117 unique website visitors. Safety in our values and in our facility Our playground was updated so children can play on new, safer equipment. Women's Advocates adopted seven "core values" that we embrace in all facets of our facility, programming, administration, and outreach. These values include belonging, collaboration, compassion, data-driven decision making, dignity and respect, excellence, and safety.

The Opus Group encouraged the community to select the winner of the Gerry Rauenhorst Building Communities Award, which Women's Advocates won thanks to over 10,000 votes for our organization!

America's Fun Science was one of many community partners to visit the Children's Program.

COMMUNIT Y SUPPORT Womenâ&#x20AC;&#x2122;s Advocates appreciates the dedication of volunteers at our shelter and in the community. Our meal service, governance, housekeeping, outreach, events, donation drives, landscaping, and childrenâ&#x20AC;&#x2122;s services benefited greatly from the donated time and energy of 522 caring volunteers last year. In addition to board members and the various other community partners with whom we collaborate, we would like to thank the following individuals and groups for their volunteer service in the 2016-2017 Fiscal Year: Groups:

Order of the Eastern Stars

Volunteers gave 3,352 hours of service in the year, equaling the time of