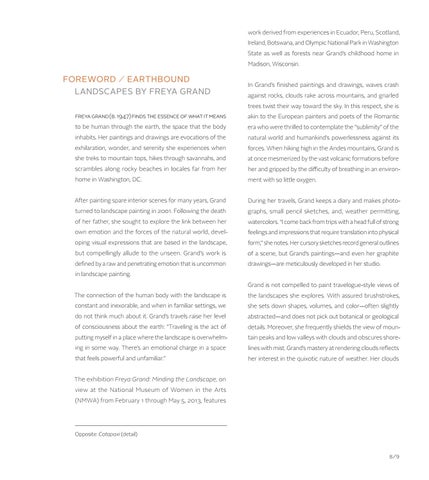 In Grand’s finished paintings and drawings, waves crash against rocks, clouds rake across mountains, and gnarled trees twist their way toward the sky. In this respect, she is

akin to the European painters and poets of the Romantic

to be human through the earth, the space that the body

era who were thrilled to contemplate the “sublimity” of the

inhabits. Her paintings and drawings are evocations of the

natural world and humankind’s powerlessness against its

exhilaration, wonder, and serenity she experiences when

forces. When hiking high in the Andes mountains, Grand is

she treks to mountain tops, hikes through savannahs, and

at once mesmerized by the vast volcanic formations before

scrambles along rocky beaches in locales far from her

her and gripped by the difficulty of breathing in an environ-

ment with so little oxygen.

After painting spare interior scenes for many years, Grand

During her travels, Grand keeps a diary and makes photo-

turned to landscape painting in 2001. Following the death

of her father, she sought to explore the link between her

watercolors. “I come back from trips with a head full of strong

own emotion and the forces of the natural world, devel-

feelings and impressions that require translation into physical

oping visual expressions that are based in the landscape,

but compellingly allude to the unseen. Grand’s work is

of a scene, but Grand’s paintings—and even her graphite

defined by a raw and penetrating emotion that is uncommon

drawings—are meticulously developed in her studio.

in landscape painting.  Grand is not compelled to paint travelogue-style views of The connection of the human body with the landscape is

the landscapes she explores. With assured brushstrokes,

constant and inexorable, and when in familiar settings, we

she sets down shapes, volumes, and color—often slightly

do not think much about it. Grand’s travels raise her level

abstracted—and does not pick out botanical or geological

of consciousness about the earth: “Traveling is the act of

details. Moreover, she frequently shields the view of moun-

putting myself in a place where the landscape is overwhelm-

tain peaks and low valleys with clouds and obscures shore-

ing in some way. There’s an emotional charge in a space

that feels powerful and unfamiliar.”

her interest in the quixotic nature of weather. Her clouds

The exhibition Freya Grand: Minding the Landscape, on view at the National Museum of Women in the Arts (NMWA) from February 1 through May 5, 2013, features 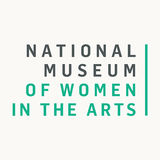 Women in the Arts

This catalogue was published on the occasion of “Freya Grand: Minding the Landscape,” on view at the National Museum of Women in the Arts fr...

This catalogue was published on the occasion of “Freya Grand: Minding the Landscape,” on view at the National Museum of Women in the Arts fr...