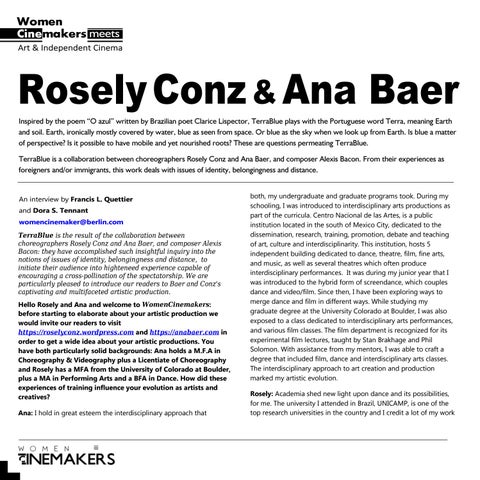 Rosely Conz &amp; Ana Baer Inspired by the poem â&amp;#x20AC;&amp;#x153;O azulâ&amp;#x20AC;? written by Brazilian poet Clarice Lispector, TerraBlue plays with the Portuguese word Terra, meaning Earth and soil. Earth, ironically mostly covered by water, blue as seen from space. Or blue as the sky when we look up from Earth. Is blue a matter of perspective? Is it possible to have mobile and yet nourished roots? These are questions permeating TerraBlue. TerraBlue is a collaboration between choreographers Rosely Conz and Ana Baer, and composer Alexis Bacon. From their experiences as foreigners and/or immigrants, this work deals with issues of identity, belongingness and distance.

is the result of the collaboration between choreographers Rosely Conz and Ana Baer, and composer Alexis Bacon: they have accomplished such insightful inquiry into the notions of issues of identity, belongingness and distance, to initiate their audience into highteneed experience capable of encouraging a cross-pollination of the spectatorship. We are particularly pleased to introduce our readers to Baer and Conz&#39;s captivating and multifaceted artistic production. Hello Rosely and Ana and welcome to : before starting to elaborate about your artistic production we would invite our readers to visit and in order to get a wide idea about your artistic productions. You have both particularly solid backgrounds: Ana holds a M.F.A in Choreography &amp; Videography plus a Licentiate of Choreography and Rosely has a MFA from the University of Colorado at Boulder, plus a MA in Performing Arts and a BFA in Dance. How did these experiences of training influence your evolution as artists and creatives? Ana: I hold in great esteem the interdisciplinary approach that

both, my undergraduate and graduate programs took. During my schooling, I was introduced to interdisciplinary arts productions as part of the curricula. Centro Nacional de las Artes, is a public institution located in the south of Mexico City, dedicated to the dissemination, research, training, promotion, debate and teaching of art, culture and interdisciplinarity. This institution, hosts 5 independent building dedicated to dance, theatre, film, fine arts, and music, as well as several theatres which often produce interdisciplinary performances. It was during my junior year that I was introduced to the hybrid form of screendance, which couples dance and video/film. Since then, I have been exploring ways to merge dance and film in different ways. While studying my graduate degree at the University Colorado at Boulder, I was also exposed to a class dedicated to interdisciplinary arts performances, and various film classes. The film department is recognized for its experimental film lectures, taught by Stan Brakhage and Phil Solomon. With assistance from my mentors, I was able to craft a degree that included film, dance and interdisciplinary arts classes. The interdisciplinary approach to art creation and production marked my artistic evolution. Rosely: Academia shed new light upon dance and its possibilities, for me. The university I attended in Brazil, UNICAMP, is one of the top research universities in the country and I credit a lot of my work 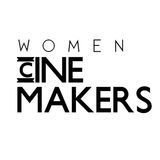