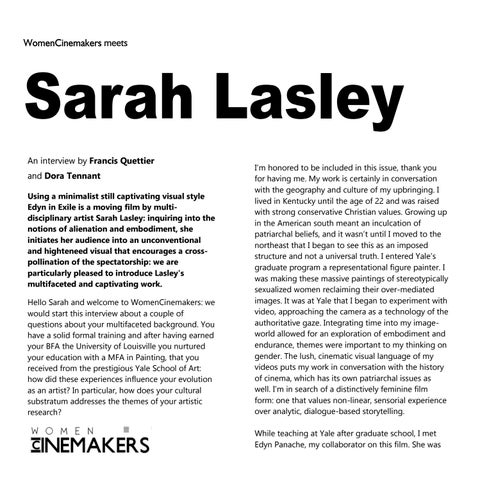 Sarah Lasley An interview by Francis Quettier and Dora Tennant Using a minimalist still captivating visual style Edyn in Exile is a moving film by multidisciplinary artist Sarah Lasley: inquiring into the notions of alienation and embodiment, she initiates her audience into an unconventional and highteneed visual that encourages a crosspollination of the spectatorship: we are particularly pleased to introduce Lasley&#39;s multifaceted and captivating work. Hello Sarah and welcome to WomenCinemakers: we would start this interview about a couple of questions about your multifaceted background. You have a solid formal training and after having earned your BFA the University of Louisville you nurtured your education with a MFA in Painting, that you received from the prestigious Yale School of Art: how did these experiences influence your evolution as an artist? In particular, how does your cultural substratum addresses the themes of your artistic research?

I’m honored to be included in this issue, thank you for having me. My work is certainly in conversation with the geography and culture of my upbringing. I lived in Kentucky until the age of 22 and was raised with strong conservative Christian values. Growing up in the American south meant an inculcation of patriarchal beliefs, and it wasn’t until I moved to the northeast that I began to see this as an imposed structure and not a universal truth. I entered Yale’s graduate program a representational figure painter. I was making these massive paintings of stereotypically sexualized women reclaiming their over-mediated images. It was at Yale that I began to experiment with video, approaching the camera as a technology of the authoritative gaze. Integrating time into my imageworld allowed for an exploration of embodiment and endurance, themes were important to my thinking on gender. The lush, cinematic visual language of my videos puts my work in conversation with the history of cinema, which has its own patriarchal issues as well. I’m in search of a distinctively feminine film form: one that values non-linear, sensorial experience over analytic, dialogue-based storytelling. While teaching at Yale after graduate school, I met Edyn Panache, my collaborator on this film. She was 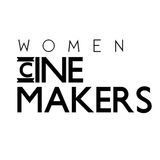