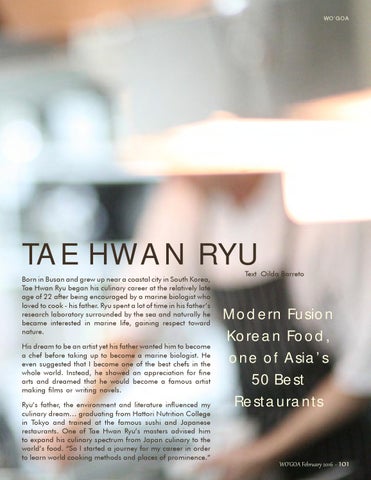 TAE HWAN RYU Born in Busan and grew up near a coastal city in South Korea, Tae Hwan Ryu began his culinary career at the relatively late age of 22 after being encouraged by a marine biologist who loved to cook - his father. Ryu spent a lot of time in his father’s research laboratory surrounded by the sea and naturally he became interested in marine life, gaining respect toward nature. His dream to be an artist yet his father wanted him to become a chef before taking up to become a marine biologist. He even suggested that I become one of the best chefs in the whole world. Instead, he showed an appreciation for fine arts and dreamed that he would become a famous artist making films or writing novels. Ryu’s father, the environment and literature influenced my culinary dream… graduating from Hattori Nutrition College in Tokyo and trained at the famous sushi and Japanese restaurants. One of Tae Hwan Ryu’s masters advised him to expand his culinary spectrum from Japan culinary to the world’s food. “So I started a journey for my career in order to learn world cooking methods and places of prominence.”