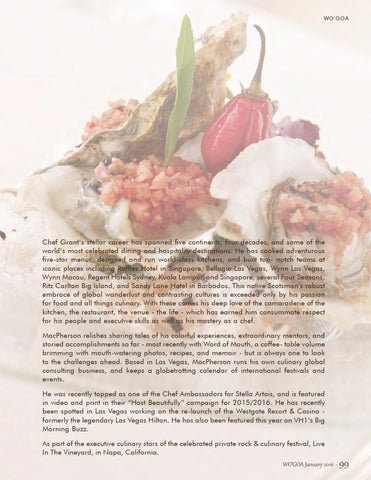 Chef Grant’s stellar career has spanned five continents, four decades, and some of the world’s most celebrated dining and hospitality destinations. He has cooked adventurous five-star menus, designed and run world-class kitchens, and built top- notch teams at iconic places including Raffles Hotel in Singapore, Bellagio Las Vegas, Wynn Las Vegas, Wynn Macau, Regent Hotels Sydney, Kuala Lampur, and Singapore, several Four Seasons, Ritz Carlton Big Island, and Sandy Lane Hotel in Barbados. This native Scotsman’s robust embrace of global wanderlust and contrasting cultures is exceeded only by his passion for food and all things culinary. With these comes his deep love of the camaraderie of the kitchen, the restaurant, the venue - the life - which has earned him consummate respect for his people and executive skills as well as his mastery as a chef. MacPherson relishes sharing tales of his colorful experiences, extraordinary mentors, and storied accomplishments so far - most recently with Word of Mouth, a coffee- table volume brimming with mouth-watering photos, recipes, and memoir - but is always one to look to the challenges ahead. Based in Las Vegas, MacPherson runs his own culinary global consulting business, and keeps a globetrotting calendar of international festivals and events. He was recently tapped as one of the Chef Ambassadors for Stella Artois, and is featured in video and print in their “Host Beautifully” campaign for 2015/2016. He has recently been spotted in Las Vegas working on the re-launch of the Westgate Resort & Casino formerly the legendary Las Vegas Hilton. He has also been featured this year on VH1’s Big Morning Buzz. As part of the executive culinary stars of the celebrated private rock & culinary festival, Live In The Vineyard, in Napa, California. WO’GOA January 2016 -