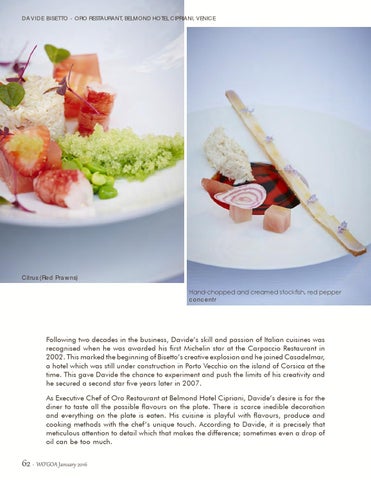 Following two decades in the business, Davide’s skill and passion of Italian cuisines was recognised when he was awarded his first Michelin star at the Carpaccio Restaurant in 2002. This marked the beginning of Bisetto’s creative explosion and he joined Casadelmar, a hotel which was still under construction in Porto Vecchio on the island of Corsica at the time. This gave Davide the chance to experiment and push the limits of his creativity and he secured a second star five years later in 2007. As Executive Chef of Oro Restaurant at Belmond Hotel Cipriani, Davide’s desire is for the diner to taste all the possible flavours on the plate. There is scarce inedible decoration and everything on the plate is eaten. His cuisine is playful with flavours, produce and cooking methods with the chef’s unique touch. According to Davide, it is precisely that meticulous attention to detail which that makes the difference; sometimes even a drop of oil can be too much.