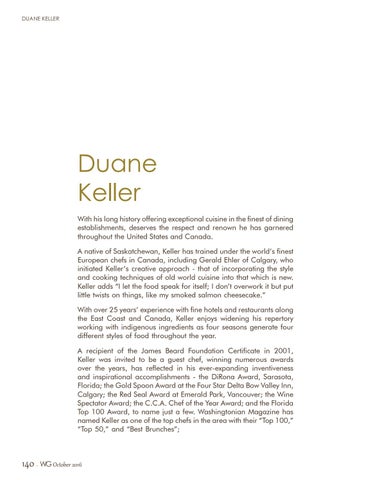 Duane Keller With his long history offering exceptional cuisine in the finest of dining establishments, deserves the respect and renown he has garnered throughout the United States and Canada. A native of Saskatchewan, Keller has trained under the world’s finest European chefs in Canada, including Gerald Ehler of Calgary, who initiated Keller’s creative approach - that of incorporating the style and cooking techniques of old world cuisine into that which is new. Keller adds “I let the food speak for itself; I don’t overwork it but put little twists on things, like my smoked salmon cheesecake.” With over 25 years’ experience with fine hotels and restaurants along the East Coast and Canada, Keller enjoys widening his repertory working with indigenous ingredients as four seasons generate four different styles of food throughout the year. A recipient of the James Beard Foundation Certificate in 2001, Keller was invited to be a guest chef, winning numerous awards over the years, has reflected in his ever-expanding inventiveness and inspirational accomplishments - the DiRona Award, Sarasota, Florida; the Gold Spoon Award at the Four Star Delta Bow Valley Inn, Calgary; the Red Seal Award at Emerald Park, Vancouver; the Wine Spectator Award; the C.C.A. Chef of the Year Award; and the Florida Top 100 Award, to name just a few. Washingtonian Magazine has named Keller as one of the top chefs in the area with their “Top 100,” “Top 50,” and “Best Brunches”;