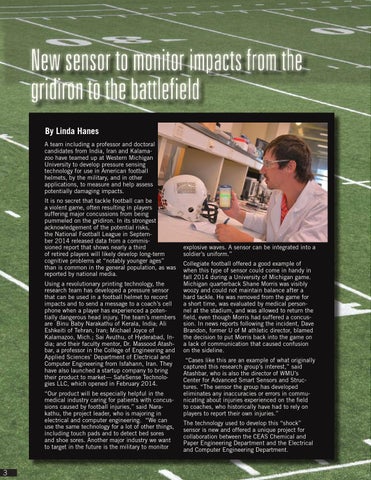 New sensor to monitor impacts from the gridiron to the battlefield By Linda Hanes A team including a professor and doctoral candidates from India, Iran and Kalamazoo have teamed up at Western Michigan University to develop pressure sensing technology for use in American football helmets, by the military, and in other applications, to measure and help assess potentially damaging impacts. It is no secret that tackle football can be a violent game, often resulting in players suffering major concussions from being pummeled on the gridiron. In its strongest acknowledgement of the potential risks, the National Football League in September 2014 released data from a commissioned report that shows nearly a third of retired players will likely develop long-term cognitive problems at “notably younger ages” than is common in the general population, as was reported by national media. Using a revolutionary printing technology, the research team has developed a pressure sensor that can be used in a football helmet to record impacts and to send a message to a coach’s cell phone when a player has experienced a potentially dangerous head injury. The team’s members are Binu Baby Narakathu of Kerala, India; Ali Eshkeiti of Tehran, Iran; Michael Joyce of Kalamazoo, Mich.; Sai Avuthu, of Hyderabad, India; and their faculty mentor, Dr. Massood Atashbar, a professor in the College of Engineering and Applied Sciences’ Department of Electrical and Computer Engineering from Isfahann, Iran. They have also launched a startup company to bring their product to market— SafeSense Technologies LLC, which opened in February 2014. “Our product will be especially helpful in the medical industry caring for patients with concussions caused by football injuries,” said Narakathu, the project leader, who is majoring in electrical and computer engineering. “We can use the same technology for a lot of other things, including touch pads and to detect bed sores and shoe sores. Another major industry we want to target in the future is the military to monitor

explosive waves. A sensor can be integrated into a soldier’s uniform.” Collegiate football offered a good example of when this type of sensor could come in handy in fall 2014 during a University of Michigan game. Michigan quarterback Shane Morris was visibly woozy and could not maintain balance after a hard tackle. He was removed from the game for a short time, was evaluated by medical personnel at the stadium, and was allowed to return the field, even though Morris had suffered a concussion. In news reports following the incident, Dave Brandon, former U of M athletic director, blamed the decision to put Morris back into the game on a lack of communication that caused confusion on the sideline. “Cases like this are an example of what originally captured this research group’s interest,” said Atashbar, who is also the director of WMU’s Center for Advanced Smart Sensors and Structures. “The sensor the group has developed eliminates any inaccuracies or errors in communicating about injuries experienced on the field to coaches, who historically have had to rely on players to report their own injuries.” The technology used to develop this “shock” sensor is new and offered a unique project for collaboration between the CEAS Chemical and Paper Engineering Department and the Electrical and Computer Engineering Department. 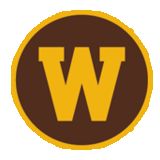 In this issue of WMU International News, we are featuring some of the international activity ongoing in the College of Engineering and Appli...

In this issue of WMU International News, we are featuring some of the international activity ongoing in the College of Engineering and Appli...