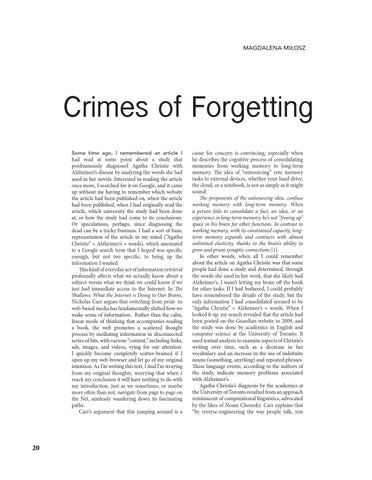 Crimes of Forgetting Some time ago, I remembered an article I had read at some point about a study that posthumously diagnosed Agatha Christie with Alzheimer’s disease by analyzing the words she had used in her novels. Interested in reading the article once more, I searched for it on Google, and it came up without me having to remember which website the article had been published on, when the article had been published, when I had originally read the article, which university the study had been done at, or how the study had come to its conclusions. Or speculations, perhaps, since diagnosing the dead can be a tricky business. I had a sort of basic representation of the article in my mind (“Agatha Christie” + Alzheimer’s + words), which amounted to a Google search term that I hoped was specific enough, but not too specific, to bring up the information I wanted. This kind of everyday act of information retrieval profoundly affects what we actually know about a subject versus what we think we could know if we just had immediate access to the Internet. In The Shallows: What the Internet is Doing to Our Brains, Nicholas Carr argues that switching from print- to web-based media has fundamentally shifted how we make sense of information. Rather than the calm, linear mode of thinking that accompanies reading a book, the web promotes a scattered thought process by mediating information in disconnected series of bits, with various “content,” including links, ads, images, and videos, vying for our attention. I quickly become completely scatter-brained if I open up my web browser and let go of my original intention. As I’m writing this text, I find I’m straying from my original thoughts, worrying that when I reach my conclusion it will have nothing to do with my introduction, just as we sometimes, or maybe more often than not, navigate from page to page on the Net, aimlessly wandering down its fascinating paths. Carr’s argument that this jumping around is a

cause for concern is convincing, especially when he describes the cognitive process of consolidating memories from working memory to long-term memory. The idea of “outsourcing” rote memory tasks to external devices, whether your hard drive, the cloud, or a notebook, is not as simple as it might sound: The proponents of the outsourcing idea...confuse working memory with long-term memory. When a person fails to consolidate a fact, an idea, or an experience in long-term memory, he’s not “freeing up” space in his brain for other functions. In contrast to working memory, with its constrained capacity, longterm memory expands and contracts with almost unlimited elasticity, thanks to the brain’s ability to grow and prune synaptic connections [1]. In other words, when all I could remember about the article on Agatha Christie was that some people had done a study and determined, through the words she used in her work, that she likely had Alzheimer’s, I wasn’t letting my brain off the hook for other tasks. If I had bothered, I could probably have remembered the details of the study, but the only information I had consolidated seemed to be “Agatha Christie” + Alzheimer’s + words. When I looked it up, my search revealed that the article had been posted on the Guardian website in 2009, and the study was done by academics in English and computer science at the University of Toronto. It used textual analysis to examine aspects of Christie’s writing over time, such as a decrease in her vocabulary and an increase in the use of indefinite nouns (something, anything) and repeated phrases. These language events, according to the authors of the study, indicate memory problems associated with Alzheimer’s. Agatha Christie’s diagnosis by the academics at the University of Toronto resulted from an approach reminiscent of computational linguistics, advocated by the likes of Noam Chomsky. Carr explains that “by reverse-engineering the way people talk, you 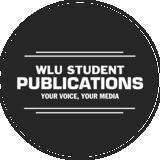