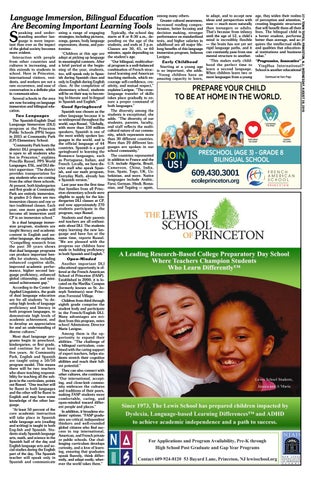 peaking and understanding another language is more important than ever as the impact of the global society becomes more evident. Interaction with people from other countries and cultures is increasing, and this extends to students in school. Here in Princeton, international visitors, residents, and workers are not a rare occurrence, and ease of conversation is a definite plus in communication. Several schools in the area are now focusing on language immersion and bilingual education. Two Languages The Spanish-English Dual Language Immersion (DLI) program at the Princeton Public Schools (PPS) began in 2015 at Community Park (CP) Elementary School. “Community Park hosts the district DLI program, which is open to all students who live in Princeton,” explains Priscilla Russel, PPS World Languages, ESL, and DLI district supervisor. “The district provides transportation for any students who are coming from the other three schools. At present, both kindergarten and first grade at Community Park are entirely immersion. In grades 2-5 there are two immersion classes and one or two traditional classes. Each year, one more grades will become all immersion until CP is an immersion school.” In a dual language immersion program, students are taught literacy and academic content in English and another language, she explains. “Compelling research from the past 30 years shows that dual language programs can produce important benefits for students, including enhanced cognitive skills, improved academic performance, higher second language proficiency, enhanced global citizenship, and minimized achievement gap.” According to the Center for Applied Linguistics, the goals of dual language education are for all students “to develop high levels of language proficiency and literacy in both program languages, to demonstrate high levels of academic achievement, and to develop an appreciation for and an understanding of diverse cultures.” Most dual language programs begin in preschool, kindergarten, or first grade, and continue for at least five years. At Community Park, English and Spanish are taught using a 50/50 program model. This means there will be two teachers who share teaching responsibility for teaching all the subjects in the curriculum, points out Russel. “One teacher will be fluent in both languages and the other will be fluent in English and may have some knowledge of the other language. “At least 50 percent of the core academic instruction will take place in Spanish while language arts (reading and writing) is taught in both Eng-lish and Spanish. Students study Spanish language arts, math, and science in the Spanish half of the day and English language arts and social studies during the English part of the day. The Spanish teacher will speak only in Spanish and communicate

using a range of engaging strategies, including pictures, songs, games, body language expressions, drama, and pantomime. “Children at this age are adept at picking up language in meaningful contexts. After a brief period at the beginning of the year, students, too, will speak only in Spanish during Spanish class and only in English during English class. At the completion of elementary school, students will be on their way to becoming bi-literate and bi-lingual in Spanish and English.” Good Springboard Spanish was chosen as the other language because it is so widespread throughout the world, says Russel. “Globally, with more than 330 million speakers, Spanish is one of the most widely spoken languages in the world, and is the official language of 44 countries. Spanish is a good springboard to learning the Romance languages, such as Portuguese, Italian, and French. Locally, we have district staff who speak Spanish, and our math program, Everyday Math, already has a Spanish version.” Last year was the first time that families from all Princeton elementary schools were eligible to apply for the kindergarten DLI classes at CP, and now approximately 270 students participate in the program, says Russel. Students and their parents and teachers are all enthusiastic about DLI. The students enjoy learning the new language and have fun at the same time, reports Russel. “We are pleased with the progress our children have made in building proficiency in both Spanish and English.” Open-Minded Another important DLI educational opportunity is offered at the French American School of Princeton (FASP). Established in 2000, it is located on the Marillac Campus (formerly known as St. Joseph Seminary) near Princeton Forrestal Village. Children from third through eighth grade comprise the student body and participate in the French/English DLI. Many advantages are evident from this program, notes school Admissions Director Marie Lavigne. Among them is the opportunity to expand their abilities. “The challenge of a bilingual curriculum, combined with the caring support of expert teachers, helps students stretch their cognitive abilities and reach their fullest potential.” They can also connect with other cultures, she continues. “Our international, accepting, and close-knit community embraces the cultures and traditions of their peers, making FASP students more comfortable, caring, and open-minded toward different people and places.” In addition, it broadens students’ options. “FASP graduates are critical, independent thinkers and well-rounded global citizens who find success in top international, American, and French private or public schools. Our challenging curriculum develops curiosity, and a love of learning, ensuring that graduates speak fluently, think differently, and adapt easily, wherever the world takes them.”

Typically, the school day starts at 8 or 8:30 a.m., depending on the age of the students, and ends at 3 p.m. Classes are 30, 45, or 60 minutes, again depending on the student’s age. “Our bilingual, multicultural program is a well-balanced combination of French structured learning and American teaching methods, which encourage self-confidence, creativity, and mutual respect,” explains Lavigne. “The crosslanguage transfer of skills takes place gradually to ensure a proper command of both languages.” The diversity among the students is exceptional, she adds. “The diversity of our students, parents, faculty, and staff reflects the multicultural nature of our community, which represents more than 30 different countries. More than 20 different languages are spoken in our school community.” The countries represented in addition to France and the U.S. include Algeria, Brazil, Cameroon, China, India, Iran, Spain, Togo, UK, Uzbekistan, and more. Native languages include Arabic, Farsi, German, Hindi, Romanian, and Tagalog — again,

among many others. Greater cultural awareness, increased reading comprehension, better focusing and decision making, stronger performance on standardized tests, and higher salaries in adulthood are all major lifelong benefits of this language immersion program, believes Lavigne. Early Childhood Starting at a young age is so important, she adds. “Young children have an amazing capacity to learn,

to adapt, and to accept new ideas and perspectives with ease — much more naturally than teenagers or adults. That’s because from infancy until the age of 12, a child’s mind is incredibly flexible — the brain has not yet set rigid language paths, and it can constantly pass from one mental structure to another. “This makes early childhood the perfect time to learn a second language. When children learn two or more languages from a young

age, they widen their realms of perception and attention, creating linguistic structures that will benefit them all their lives. The bilingual child is a better student, performs better than average, and acquires the intellectual skills and qualities that educational institutions and business value.” “Progressive, Innovative” YingHua Inter nat ional School is another educational Continued on Next Page

PREPARE YOUR CHILD TO BE AT HOME IN THE WORLD. 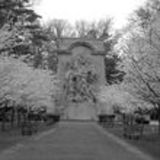