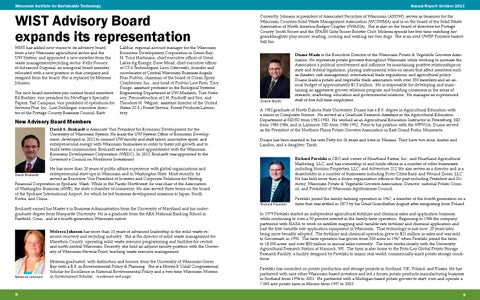 WIST Advisory Board expands its representation

WIST has added new voices to its advisory board from a key Wisconsin agricultural sector and the UW System, and appointed a new member from the waste management/recycling sector. Kelly Rooney, of Advanced Disposal, an inaugural board member, relocated with a new position in that company and resigned from the board. She is replaced by Meleesa Johnson.

New Advisory Board Members David A. Brukardt is Associate Vice President for Economic Development for the University of Wisconsin System. He leads the UW System Office of Economic Development, developed in 2012 to connect UW faculty and staff talent, innovative spirit, and entrepreneurial energy with Wisconsin businesses in order to foster job growth and to build better communities. Brukardt serves in a joint appointment with the Wisconsin Economic Development Corporation (WEDC). In 2013, Brukardt was appointed to the Governor’s Council on Workforce Investment.

Currently, Johnson is president of Associated Recyclers of Wisconsin (AROW), serves as treasurer for the Wisconsin Counties Solid Waste Management Association (WCSWMA) and is on the board of the Solid Waste Association of North America-Badger Chapter (SWANA). She is also on the board of directors for Portage County Youth Soccer and the SPASH Girls Soccer Booster Club. Meleesa spends her free time watching her granddaughter play soccer, reading, cooking and walking her two dogs. She is an avid UWSP Pointers basketball fan.

A 1982 graduate of North Dakota State University, Duane has a B.S. degree in Agricultural Education with a minor in Composite Science. He served as a Graduate Research Assistant in the Agricultural Education Department at NDSU from 1982-1983. He worked as an Agricultural Education Instructor in Petersburg, ND from 1983-1986, and in Larimore, ND from 1986-1992. Prior to his position with the WPVGA, Duane served as the President of the Northern Plains Potato Growers Association in East Grand Forks, Minnesota. Duane has been married to his wife Patty for 26 years and lives in Wausau. They have two sons, Austin and Landon, and a daughter, Tarah. Richard Pavelski is CEO and owner of Heartland Farms, Inc., and Heartland Agricultural Marketing, LLC, and has ownership of and holds offices in a number of other businesses including Horizon Properties, LLC, and Adventure 212. He also serves as a director and is a shareholder in a number of businesses including River Cities Bank and Wound Zoom, LLC. He has held more than a dozen organization offices in the past including President and Director, Wisconsin Potato & Vegetable Growers Association; Director, national Potato Council; and President of Wisconsin Agribusiness Council.

He has more than 20 years of public affairs experience with global organizations and entrepreneurial start-ups in Wisconsin and in Washington State. Most recently, he served as Executive Vice President of Investor and Corporate Relations for Sterling Financial Corporation in Spokane, Wash. While in the Pacific Northwest, he was chair of the Association of Washington Business (AWB), the state’s chamber of commerce. He also served three terms on the board of the Spokane International Airport, for which he led business development missions to Japan, South Korea, and China.

Brukardt earned his Master’s in Business Administration from the University of Maryland and his undergraduate degree from Marquette University. He is a graduate from the ABA National Banking School in Fairfield, Conn., and is a fourth-generation Wisconsin native. Meleesa Johnson has more than 10 years of advanced leadership in the solid waste resource recovery and recycling industry. She is the director of solid waste management for Marathon County, operating solid waste resource programming and facilities for central and north-central Wisconsin. Recently, she held an adjunct faculty position with the University of Wisconsin-Stevens Point, teaching waste resource management.

Meleesa graduated, with distinction and honors, from the University of Wisconsin-Green Bay with a B.S. in Environmental Policy & Planning. She is a Morris K Udall Congressional Scholar for Excellence in National Environmental Policy and a two-time Wisconsin Women in Government Scholar. (continued next page)

Duane Maatz is the Executive Director of the Wisconsin Potato & Vegetable Growers Association. He represents potato growers throughout Wisconsin while working to increase the Association’s political involvement and influence by maintaining positive relationships on state and federal legislation, playing instrumental roles on issues that affect members such as disaster, risk management, international trade regulations, and agricultural policy. Duane leads a potato and vegetable trade association with over 350 members and an annual budget of approximately $1.5 million. He is responsible for developing and maintaining an aggressive grower relations program and building consensus in the areas of research, marketing, education and governmental relations. He manages an experienced staff of five full-time employees.

Pavelski joined the family farming operation in 1967, a member of the fourth generation on a farm that was settled in 1873 by his Great Grandfather August after emigrating from Poland.

In 1979 Pavelski started an independent agricultural fertilizer and chemical sales and application business, while continuing to own a 50 percent interest in the family farm operation. Beginning in 1986 the company partnered with NASA to work on satellite mapping and variable rate fertilizer and chemical application and had the first variable rate application equipment in Wisconsin. That technology is just now, 25 years later, being more broadly adopted. The fertilizer and chemical operation grew to $21 million in sales and was sold to Growmark in 1990. The farm operation has grown from 550 acres in 1967 when Pavelski joined the farm, to 18,000 acres, and over $50 million in annual sales currently. The farm works closely with the University Agricultural Research Station at Hancock, WI. The farm is also home to the Frito-Lay Global Potato Storage Research Facility, a facility designed by Pavelski to mimic real world, commercially sized potato storage conditions. Pavelski has consulted on potato production and storage projects in Scotland, UK, Poland, and Russia. He has partnered with nine other Wisconsin-based investors and led a frozen potato products manufacturing business in Scotland from 1994 to 2001. He partnered with a Michigan-based potato grower to start, own and operate a 7,000 acre potato farm in Mexico from 1997 to 2003. 9 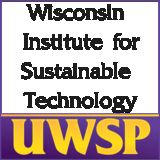 Sustainability in research, laboratory services and education; activities of the Wisconsin Institute for Sustainable Technology

Sustainability in research, laboratory services and education; activities of the Wisconsin Institute for Sustainable Technology