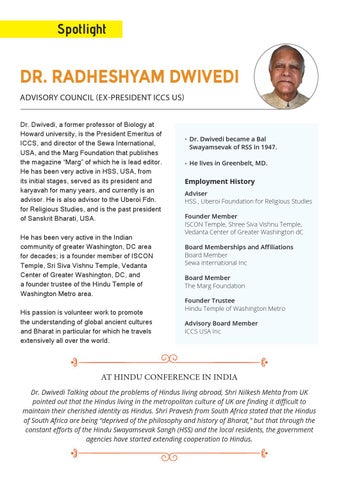 DR. RADHESHYAM DWIVEDI ADVISORY COUNCIL (EX-PRESIDENT ICCS US) Dr. Dwivedi, a former professor of Biology at Howard university, is the President Emeritus of ICCS, and director of the Sewa International, USA, and the Marg Foundation that publishes the magazine “Marg” of which he is lead editor. He has been very active in HSS, USA, from its initial stages, served as its president and karyavah for many years, and currently is an advisor. He is also advisor to the Uberoi Fdn. for Religious Studies, and is the past president of Sanskrit Bharati, USA. He has been very active in the Indian community of greater Washington, DC area for decades; is a founder member of ISCON Temple, Sri Siva Vishnu Temple, Vedanta Center of Greater Washington, DC, and a founder trustee of the Hindu Temple of Washington Metro area. His passion is volunteer work to promote the understanding of global ancient cultures and Bharat in particular for which he travels extensively all over the world.

Dr. Dwivedi became a Bal Swayamsevak of RSS in 1947. He lives in Greenbelt, MD.

AT HINDU CONFERENCE IN INDIA Dr. Dwivedi Talking about the problems of Hindus living abroad, Shri Nilkesh Mehta from UK pointed out that the Hindus living in the metropolitan culture of UK are finding it difficult to maintain their cherished identity as Hindus. Shri Pravesh from South Africa stated that the Hindus of South Africa are being “deprived of the philosophy and history of Bharat,” but that through the constant efforts of the Hindu Swayamsevak Sangh (HSS) and the local residents, the government agencies have started extending cooperation to Hindus.

Balagokulam nurtures children to discoverand manifest that divinity. Balagokulam in Phoenix enables Indian children to appreciate their cultural roots, learn values in an enjoyable manner and make good friends. Balagokulam AZ Times gives a glimpse of wonderful, joyful activities done by multiple Shakhas in AZ. OUR GOAL IS … Facilitate children to appreciate,learn and practice their heritage and traditional way of life. Instill confidence in children about their identity. Raise Hindu awareness in the society around. Develop social awareness and leadership skills among children. 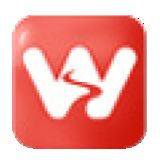