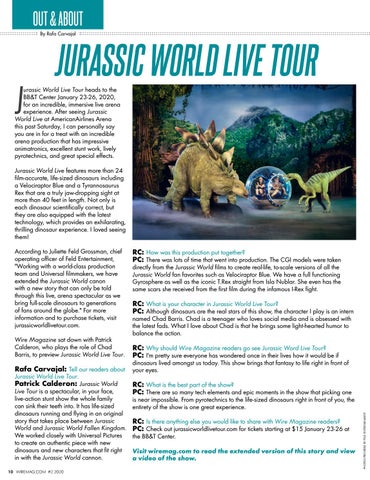 OUT & ABOUT By Rafa Carvajal

urassic World Live Tour heads to the BB&T Center January 23-26, 2020, for an incredible, immersive live arena experience. After seeing Jurassic World Live at AmericanAirlines Arena this past Saturday, I can personally say you are in for a treat with an incredible arena production that has impressive animatronics, excellent stunt work, lively pyrotechnics, and great special eďŹ&#x20AC;ects. Jurassic World Live features more than 24 film-accurate, life-sized dinosaurs including a Velociraptor Blue and a Tyrannosaurus Rex that are a truly jaw-dropping sight at more than 40 feet in length. Not only is each dinosaur scientifically correct, but they are also equipped with the latest technology, which provides an exhilarating, thrilling dinosaur experience. I loved seeing them!

RC: How was this production put together? PC: There was lots of time that went into production. The CGI models were taken directly from the Jurassic World films to create real-life, to-scale versions of all the Jurassic World fan favorites such as Velociraptor Blue. We have a full functioning Gyrosphere as well as the iconic T.Rex straight from Isla Nublar. She even has the same scars she received from the first film during the infamous I-Rex fight. RC: What is your character in Jurassic World Live Tour? PC: Although dinosaurs are the real stars of this show, the character I play is an intern named Chad Barris. Chad is a teenager who loves social media and is obsessed with the latest fads. What I love about Chad is that he brings some light-hearted humor to balance the action. RC: Why should Wire Magazine readers go see Jurassic Word Live Tour? PC: I'm pretty sure everyone has wondered once in their lives how it would be if dinosaurs lived amongst us today. This show brings that fantasy to life right in front of your eyes. RC: What is the best part of the show? PC: There are so many tech elements and epic moments in the show that picking one is near impossible. From pyrotechnics to the life-sized dinosaurs right in front of you, the entirety of the show is one great experience. RC: Is there anything else you would like to share with Wire Magazine readers? PC: Check out jurassicworldlivetour.com for tickets starting at $15 January 23-26 at the BB&T Center. Visit wiremag.com to read the extended version of this story and view a video of the show.

According to Juliette Feld Grossman, chief operating oďŹ&#x192;cer of Feld Entertainment, "Working with a world-class production team and Universal filmmakers, we have extended the Jurassic World canon with a new story that can only be told through this live, arena spectacular as we bring full-scale dinosaurs to generations of fans around the globe." For more information and to purchase tickets, visit jurassicworldlivetour.com. 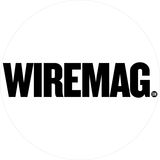