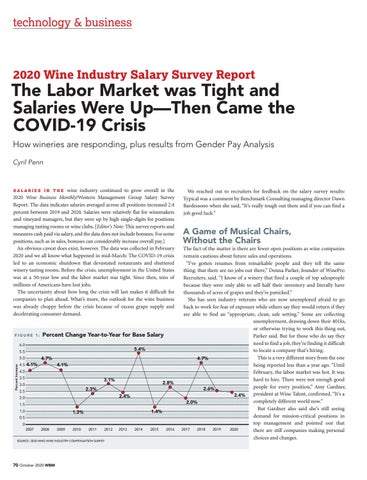 The Labor Market was Tight and Salaries Were Up—Then Came the COVID-19 Crisis How wineries are responding, plus results from Gender Pay Analysis Cyril Penn

wine industry continued to grow overall in the 2020 Wine Business Monthly/Western Management Group Salary Survey Report. The data indicates salaries averaged across all positions increased 2.4 percent between 2019 and 2020. Salaries were relatively flat for winemakers and vineyard managers, but they were up by high single-digits for positions managing tasting rooms or wine clubs. [Editor’s Note: This survey reports and measures cash paid via salary, and the data does not include bonuses. For some positions, such as in sales, bonuses can considerably increase overall pay.] An obvious caveat does exist, however. The data was collected in February 2020 and we all know what happened in mid-March: The COVID-19 crisis led to an economic shutdown that devastated restaurants and shuttered winery tasting rooms. Before the crisis, unemployment in the United States was at a 50-year low and the labor market was tight. Since then, tens of millions of Americans have lost jobs. The uncertainty about how long the crisis will last makes it difficult for companies to plan ahead. What’s more, the outlook for the wine business was already choppy before the crisis because of excess grape supply and decelerating consumer demand. SALARIES IN THE

Percent Change Year-to-Year for Base Salary

We reached out to recruiters for feedback on the salary survey results: Typical was a comment by Benchmark Consulting managing director Dawn Bardessono when she said, “It’s really tough out there and if you can find a job good luck.”

A Game of Musical Chairs, Without the Chairs The fact of the matter is there are fewer open positions as wine companies remain cautious about future sales and operations. “I’ve gotten resumes from remarkable people and they tell the same thing; that there are no jobs out there,” Donna Parker, founder of WinePro Recruiters, said. “I know of a winery that fired a couple of top salespeople because they were only able to sell half their inventory and literally have thousands of acres of grapes and they’re panicked.” She has seen industry veterans who are now unemployed afraid to go back to work for fear of exposure while others say they would return if they are able to find an “appropriate, clean, safe setting.” Some are collecting unemployment, drawing down their 401ks, or otherwise trying to work this thing out, Parker said. But for those who do say they need to find a job, they’re finding it difficult to locate a company that’s hiring. This is a very different story from the one 4.7% being reported less than a year ago. “Until February, the labor market was hot. It was hard to hire. There were not enough good people for every position,” Amy Gardner, 2.6% president at Wine Talent, confirmed. “It’s a 2.4% completely different world now.” 2.0% But Gardner also said she’s still seeing demand for mission-critical positions in top management and pointed out that 2017 2018 2019 2020 there are still companies making personal choices and changes.