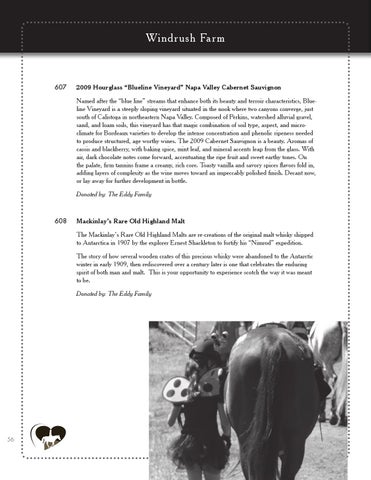 607 2009 Hourglass “Blueline Vineyard” Napa Valley Cabernet Sauvignon Named after the “blue line” streams that enhance both its beauty and terroir characteristics, Blueline Vineyard is a steeply sloping vineyard situated in the nook where two canyons converge, just south of Calistoga in northeastern Napa Valley. Composed of Perkins, watershed alluvial gravel, sand, and loam soils, this vineyard has that magic combination of soil type, aspect, and microclimate for Bordeaux varieties to develop the intense concentration and phenolic ripeness needed to produce structured, age worthy wines. The 2009 Cabernet Sauvignon is a beauty. Aromas of cassis and blackberry, with baking spice, mint leaf, and mineral accents leap from the glass. With air, dark chocolate notes come forward, accentuating the ripe fruit and sweet earthy tones. On the palate, firm tannins frame a creamy, rich core. Toasty vanilla and savory spices flavors fold in, adding layers of complexity as the wine moves toward an impeccably polished finish. Decant now, or lay away for further development in bottle. Donated by: The Eddy Family

608 Mackinlay’s Rare Old Highland Malt The Mackinlay’s Rare Old Highland Malts are re-creations of the original malt whisky shipped to Antarctica in 1907 by the explorer Ernest Shackleton to fortify his “Nimrod” expedition. The story of how several wooden crates of this precious whisky were abandoned to the Antarctic winter in early 1909, then rediscovered over a century later is one that celebrates the enduring spirit of both man and malt. This is your opportunity to experience scotch the way it was meant to be. Donated by: The Eddy Family Join us on Saturday, October 26 at 6pm at the Boston Park Plaza Hotel

Join us on Saturday, October 26 at 6pm at the Boston Park Plaza Hotel