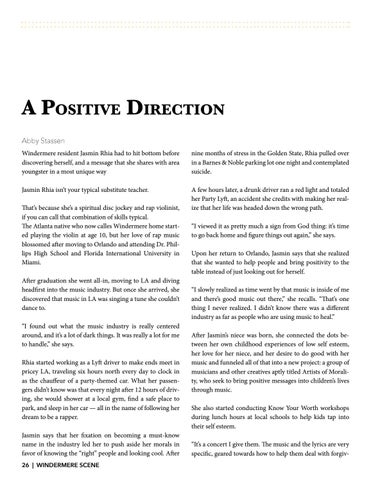 A Positive Direction Abby Stassen Windermere resident Jasmin Rhia had to hit bottom before discovering herself, and a message that she shares with area youngster in a most unique way

nine months of stress in the Golden State, Rhia pulled over in a Barnes & Noble parking lot one night and contemplated suicide.

A few hours later, a drunk driver ran a red light and totaled her Party Lyft, an accident she credits with making her realize that her life was headed down the wrong path.

That’s because she’s a spiritual disc jockey and rap violinist, if you can call that combination of skills typical. The Atlanta native who now calles Windermere home started playing the violin at age 10, but her love of rap music blossomed after moving to Orlando and attending Dr. Phillips High School and Florida International University in Miami. After graduation she went all-in, moving to LA and diving headfirst into the music industry. But once she arrived, she discovered that music in LA was singing a tune she couldn’t dance to. “I found out what the music industry is really centered around, and it’s a lot of dark things. It was really a lot for me to handle,” she says. Rhia started working as a Lyft driver to make ends meet in pricey LA, traveling six hours north every day to clock in as the chauffeur of a party-themed car. What her passengers didn’t know was that every night after 12 hours of driving, she would shower at a local gym, find a safe place to park, and sleep in her car — all in the name of following her dream to be a rapper. Jasmin says that her fixation on becoming a must-know name in the industry led her to push aside her morals in favor of knowing the “right” people and looking cool. After 26 | WINDERMERE SCENE

“I viewed it as pretty much a sign from God thing: it’s time to go back home and figure things out again,” she says. Upon her return to Orlando, Jasmin says that she realized that she wanted to help people and bring positivity to the table instead of just looking out for herself. “I slowly realized as time went by that music is inside of me and there’s good music out there,” she recalls. “That’s one thing I never realized. I didn’t know there was a different industry as far as people who are using music to heal.” After Jasmin’s niece was born, she connected the dots between her own childhood experiences of low self esteem, her love for her niece, and her desire to do good with her music and funneled all of that into a new project: a group of musicians and other creatives aptly titled Artists of Morality, who seek to bring positive messages into children’s lives through music. She also started conducting Know Your Worth workshops during lunch hours at local schools to help kids tap into their self esteem. “It’s a concert I give them. The music and the lyrics are very specific, geared towards how to help them deal with forgiv- 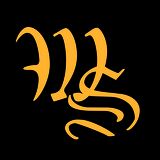