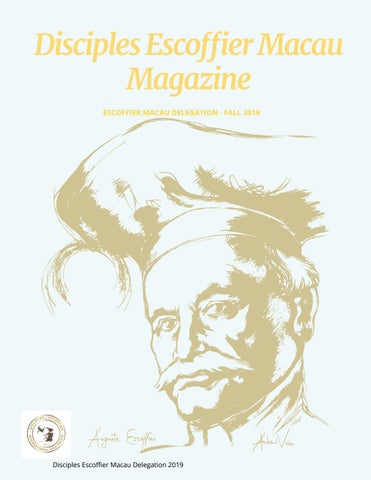 From Michel Escoffier Auguste Escoffier was born on 28th October 1846 in Villeneuve-Loubet, a small village near Nice, on the Côte d’Azur. On this same day, 170 years later, we are celebrating this outstanding man who devoted his life to modernize cooking and give the profession the rank and status it has today. Auguste started his training at the age of 13 and retired at 74. He then continued to write and travel, to visit exhibitions and participate in the opening of new hotels, like the Pierre Hotel in N.Y. in 1930. With his friend and partner Cesar Ritz, he developed the luxury hospitality industry as we know it. He established behavioral and organizational standards in the kitchen still very much in use today. He was mostly proud of having trained over 2000 chefs who then promoted French cuisine around the world. A visionary, he wrote over a 100 years ago: “Cooking, like fashion, must evolve with time and take into account the changes in peoples’ lives”. “Whilst remaining an art, cooking will become more scientific, we will simplify it and enhance the nutritive and taste values of dishes”. “What will not change are the basic principles of cooking”. But foremost, he was a man of heart, a great humanitarian, always concerned with poverty and hunger. As such, as early as 1890 at the Savoy in London, he arranged with the “Little Sisters of the Poor” to provide them every morning

with unserved food from the day before. This continued until he retired in 1920. In 1910, he wrote a “Project for the extinction of pauperism” and in 1912 created the first fundraising dinners to support charitable causes, and particularly retired chefs in need. He became the first chef in history to be awarded the Legion of Honor, from the President of France, in London in 1919, Today, his legacy lives on through the Escoffier Foundation and Museum of Culinary Art in his birthplace, the thousands of Disciples, chefs and teachers around the world, two great schools in Austin and Boulder and now even an online program!

Each year on October 20th we celebrate International Chefs Day.

How Healthy Food Works. goes deeper into what different foods do for us and why we need them.

Each in charge of the gastronomic actions led in its country in the respect for the Memory of Auguste Escoffier. Shanghai, will stay until 2012, the center of the Disciples Escoffier International Asia to coordinate Delegations, web site and to manage at least two hundred Members as well as all the events led in all the territory of Asia in the name of Disciples Escoffier International …and 2013 have seen the Asia Headquarter transferred in Hong Kong.

Every year in October

Each year on October 20th we celebrate International Chefs Day.

Charity Dinner in aid of Cradle of Hope Orphanage

When we enjoying Food & Wine We also

As every year, we are delighted to organise the competition in Hong Kong - most known as the Escoffier week. A week event that showcases our French excellence with renowned Chef

The worldâ&#x20AC;&#x2122;s largest culinary event gain more exposure and access to the best culinary experience with the elite of fine dining.

Georges Auguste Escoffier was born on October 28, 1846, in the small village of Villeneuve-Loubet in the south of France. At age 13, Escoffier moved to Nice to take up an apprenticeship at his uncle’s restaurant, Le Restaurant Franais.

At age 19, Escoffier traveled to Paris to begin training at the renowned restaurant Le Petit Moulin Rouge. His life changed dramatically when the Franco-Prussian war broke out in 1870 and he enlisted to fight. As a soldier and army chef, Escoffier learned about military organization and hierarchy. He also learned to can food. Both lessons would prove invaluable to his culinary contributions.

In addition to cooking for the wealthiest and most famous individuals of his time, Escoffier maintained several philanthropic endeavors, including programs to feed the hungry and to assist retired chefs. For his culinary and charity work, Escoffier was named a Chevalier of the Legion d’Honneur in 1920 and Officer in 1928.

In order to fund the retirement home he developed for French cooks, Escoffier became well versed in entertaining. Escoffier’s Diners d’Epicure, which were held in several European cities from 1912 to 1914, may have been some of the first fundraising events, according to his greatgrandson, Michel A. Escoffier.

Escoffier retired to Monte Carlo with his wife, Delphine, in 1921. When Escoffier was 89, Delphine passed away. A few days later, on February 12, 1935, Escoffier died as well. Disciples Escoffier International Pacific Asia every year 28 October will celebrate and create the Epicurean Dinner in month.

Disciples Escoffier Macau Delegation is dedicated to helping those in need. Every Year in October As part of Charitable Program, we support local and national charities by donating money, time and other needed resources. Our goal is to raise as much money as possible for a variety of deserving charities. Each year on October 20th we celebrate International Chefs Day. Worldchefs (WACS) has committed to using International Chefs Day to celebrate our noble profession, always remembering that it is our duty to pass on our knowledge and culinary skills to the next generation of chefs with a sense of pride and commitment to the future. Disciples Escoffier Macau Delegation want to show how food affects our bodies internally. Following the last two years of Healthy Heroes and Healthy Foods for Growing up, How Healthy Food Works goes deeper into what different foods do for us and why we need them. International Chefs Day is an opportunity to teach kids about healthy eating by letting them be

creative with food. With the chefâ&#x20AC;&#x2122;s input, education and help, the kids will be able to create recipes out of healthy foods, helping to teach the kids How Healthy Food Works. 2019 Octoer Disciples Escoffier Macau Delegation hosted an International World Chefs Day Cooking Workshop in MGM Macau on 20 October 2019 to help ECF Macau fellowship Orphanage, for their children that are abandoned, suffering, or neglect and needing protection. Our Young Talent Escoffier Competition President Chef Jerome Deconnick teach all kids how to made French tare tatin. As part of our Charitable Program, we pick one to two charity in October and donate from dinner event of the net profit made on our menu or create the cooking workshop donated the gourmet food through our Chef Members to kids or senior. We also collect donations from our members, vendors and key partners. So next time youâ&#x20AC;&#x2122;re in our activities ask about the donation to help support your community.

The prefect way to know more detail about our official sponsor partners products, join our activities around the world

From Auguste Escoffier Bible Entrecôte a la Bordelaise Bordelaise It is especially suitable for Grilled Meat. Before placing the ribeye on the the pan or grill, baste them 1

slightly with clarified butter, and repeat this operation frequently during the cooking process, so as to avoid the possible drying of the rissoled surface. 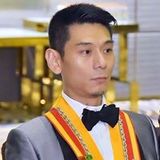