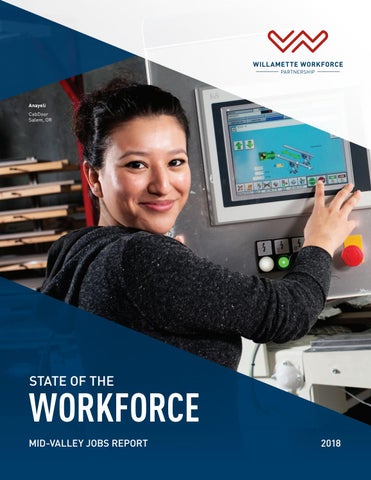 The health care sector is projected to continue being one of the fastest growing sectors in the Mid-Valley.

A LETTER FROM THE EXECUTIVE DIRECTOR Greetings, This report captures the core of the work of Willamette Workforce Partnership; identify workforce and industry needs, trends and demands, and convene diverse groups of community members to resolve challenges. The charge of our organization is broad. It includes serving job seekers through the WorkSource system and bringing public and private partners together for conversations about how to meet industry needs. At the core, our job is to add value to the community so that companies have the tools they need to thrive, and individuals have jobs that support themselves and their families.

Many stories are being told in this report. The photos are local. These are real people doing real jobs in our region. The information is up-to-date and tells the story of our area’s demographics, trends and projected growth. It’s intended to be a snapshot of the state of our workforce in early 2018. Special thanks to Will Summers, Workforce Analyst, and Patrick O’Connor, Regional Economist with the Oregon Employment Department, for their economic research and analysis which is reflected throughout these pages. As we look forward, Willamette Workforce Partnership is poised to continue building an effective workforce system. We will do this by leading and convening discussions with industry about their workforce needs, while supporting and funding work with adults and youth in WorkSource centers around the region.

Our vision is to have communities

I am excited and motivated. We live in a beautiful, economically thriving part of the country. I am committed to continue building a strong organization that is responsive, efficient and effective at working with the community in addressing pressing economic needs. I look forward to continuing to contribute to the region’s economic growth as a valued partner in the community.

together to help each other thrive.

THE MID-VALLEY’S UNEMPLOYMENT RATE IS NEAR HISTORIC LOW 12%

EMPLOYMENT IN THE MID-VALLEY BY INDUSTRY 2016 Government

WORKFORCE PROJECTIONS OCCUPATIONS The two occupational categories in the MidValley Workforce Area with the most projected job openings are service (18,000 openings), and professional (9,700 openings). Service occupations – which include jobs as varied as emergency services, pest control workers, and fast food cooks – generally pay lower wages and require lower levels of education. Professional occupations, which include web developers, engineers, and lawyers, tend to pay higher wages and require higher levels of education. Health care and construction occupations tend to be the fastest growing occupations. Driven in large part by the aging population and recessionrecovery trends noted earlier. Veterinary technicians, brickmasons, CNC operators, and home health aides are the fastest-growing large occupations in the region.

In addition to the 25,700 new jobs from businesses opening or expanding, the region’s employers will also need sufficiently trained workers for the 59,400 openings due to the need to replace those leaving occupations. With the exception of construction occupations, replacement openings will make up a majority of total job openings in all major occupational groups. Half (51%) of the projected job openings in the Mid-Valley will require some sort of education beyond high school in order for candidates to be more competitive in the hiring process. A bachelor’s degree or higher will be needed for about 24 percent of the openings at the competitive level.

MID-VALLEY OCCUPATIONS WITH THE MOST JOB OPENINGS

2. Farmworkers and Laborers for crops, nurseries, and greenhouses

10. Health technologists and technicians, all other

DEMOGRAPHIC SNAPSHOT The Mid-Valley Workforce Area’s population grew 8,155 or 1.3 percent between 2015 and 2016; slightly slower than Oregon. The Mid-Valley has some unique population characteristics compared with other workforce areas in Oregon. It has a higher percentage of young people, one of the highest birth rates in the state, and a large, fast-growing Hispanic population. Since 1980, the area has grown from roughly 397,000 residents to more than 640,000, adding more than 244,000 residents and growing 61 percent. In fact, the Mid-Valley’s population growth since 1980 exceeded the statewide growth of 54 percent. In the Mid-Valley, 13.3 percent of the population ages 25 and older had an education level less than a high school graduate (or equivalent). The Mid-Valley nearly matches the national average of 13.9 percent. In the Mid-Valley more than 5-in-6 (86.7 percent) residents ages 25 and above were high school graduates, matching the national average.

Overall, the area’s age class distribution is heavily weighted toward the younger age classes. More than one-third (34.2%) of the area’s residents are younger than 25, compared with 30.3 percent statewide. The Mid-Valley has a smaller share of its residents in their prime working years (ages 25 to 55) compared with Oregon. The percent of residents identifying themselves as “Hispanic or Latino” is significantly higher in the Mid-Valley (18.9%) than statewide (12.3%). Hispanic residents comprise 25 percent of Marion County’s population.

In addition to the 25,700 new jobs from businesses opening or expanding, the regionâ&#x20AC;&#x2122;s employers will also need sufficiently trained workers for the 59,400 openings due to the need to replace those leaving occupations. State of the Workforce 2018

This report captures the core of the work of Willamette Workforce Partnership; identify workforce and industry needs, trends and demands, an...

State of the Workforce 2018

This report captures the core of the work of Willamette Workforce Partnership; identify workforce and industry needs, trends and demands, an...