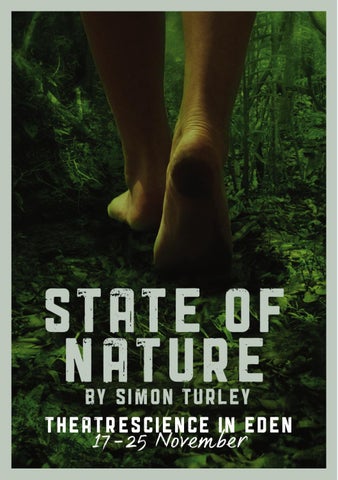 Amongst the sugar cane and the sound of waterfalls, in the steamy tropical jungle, come and see Theatrescience’s latest venture… At the heart of this project lies Theatrescience’s aim to transform scientific debate into a human story, opening up biomedical issues to greater public engagement and redefining them as matters of the heart as well as the head.

Theatrescience has been commissioning and producing new plays by UK and Indian playwrights for the past eight years, using drama and theatre to explore some of the ethical, personal, political and economic issues raised by advances in biomedical science. In 2008 Theatrescience was invited by the Wellcome Trust to remount a production of ‘Something Somatic’, also by Simon Turley, for a group of senior advisors in the Mediterranean Biome at the Eden Project in Cornwall. This planted the seed for the ‘Not My Fault’ project, taking inspiration from the Wellcome Trust’s Society Awards theme ‘Genetic difference and health’. Over the past year Theatrescience has commissioned and developed six new sitespecific plays, one of which was ‘State of Nature’ by Simon Turley. This tale of genetics, love and loss in Eden, will be performed amongst the lush flora and fauna of the Eden Project’s Rainforest Biome from 17 – 25 November. Three emerging writers from the South West Kitty O’Keeffe, Jack Redmond and Sophie MacDonald - have also created short, pocketsized pieces, which will be performed alongside Simon Turley’s play at the Eden Project. By presenting them in an unexpected and startlingly original space, Theatrescience’s productions at the Eden Project comprise a unique theatrical experience that cannot be forgotten. ‘State of Nature’ is published by Parthian.

The eden project becomes cornwall’s most unusual venue for new theatre, as theatrescience brings ‘state of nature’ by simon turley to the rainforest biome. ‘State of Nature’ is partially set in a Bengali tropical forest. Patrick has an aggressive form of dementia: Lewy Body. When his niece, Louise, comes to live with him and care for him it is both an act of love and a research project. Patrick’s life, in his large, rambling house in the Cornish countryside, is shot through with another world of memory – of the Naxalbari Uprising in India, where his commitment to radical politics brought him together with the love of his life. As the division between past and present disintegrates, Patrick’s inner world refuses to be contained, and breaks out all around him. Also: look out for short plays taking place throughout the mornings in the Mediterranean Biome. All supported by The Wellcome Trust and Arts Council England.

Locals for a fiver! If you live in Cornwall or Devon (TR, PL and EX postcodes) just bring proof of residence and some photo ID to get in for £5. All other tickets £10

Recommended age 14+ If you have any access requirements please call 01726 818895. The Rainforest Biome is a 10-minute walk from reception. Please ensure you arrive on site at least half an hour before the start. Despite the cold November days it will be warm in the Rainforest Biome. Please wear light clothes and bring a bottle of water. For more information, interviews with the cast and creative team and news from the rehearsal room please visit www.theatrescience.org.uk

Promotional A5 fold-out leaflet for 'State of Nature'