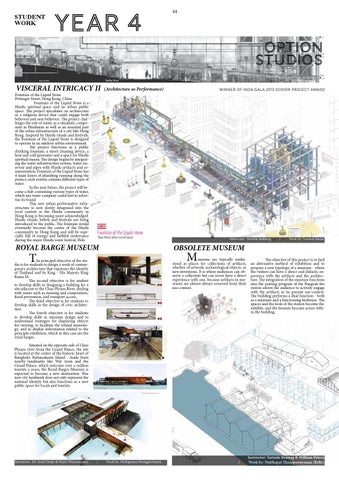 Fountain of the Liquid Stone Pottinger Street, Hong Kong, China Fountain of the Liquid Stone is a Hindu spiritual space and an urban public space. The project speculates on architecture as a religious device that could engage both believers and non-believers. The project challenges the role of water, as a ritualistic component in Hinduism as well as an essential part of the urban infrastructure of a city like Hong Kong. Inspired by Hindu rituals and festivals, the Fountain of the Liquid Stone is designed to operate in an outdoor urban environment. The project functions as a public drinking fountain, a street cleaning device, a heat and cold generator and a space for Hindu spiritual means. The design begins by integrating the water infrastructure system, water reservoir and pipes with Hindu artifacts and ornamentation. Fountain of the Liquid Stone has 4 main layers of plumbing running along the project; each system contains different types of water. In the near future, the project will become a hub containing various types of water, which any water company could rent to advertise its brand. This new urban performative infrastructure is now slowly integrated into the local context as the Hindu community in Hong Kong is becoming more acknowledged. Hindu rituals, beliefs and festivals are being introduced to the public. The fountain would eventually become the center of the Hindu community in Hong Kong and will be especially full of energy and faithful exuberance during the major Hindu water festival, Holi.

useums are typically understood as places for collections of artifacts, whether of artwork, archaeological objects, or new inventions. It is where audiences can observe a collection but can never have a direct experience with one, because artifacts in museums are almost always removed from their use-context.

The objective of this project is to find an alternative method of exhibition and to propose a new typology of a museum - where the visitors can have a direct and didactic experience with the artifacts and the architecture. The integration of the museum functions into the existing program of the Bangrak fire station allows the audience to actively engage with the artifacts in its present use-context. The building performs a dual function - both as a museum and a functioning firehouse. The spaces and the tools of the station become the exhibits, and the firemen become actors within the building.

Situated on the opposite side of Chao Phraya river from the Grand Palace, the site is located at the center of the historic heart of Bangkokâ&#x20AC;&#x2122;s Rattanakosin Island . Aside from nearby landmarks like Wat Arun and the Grand Palace, which welcome over a million tourists a years, the Royal Barges Museum is expected to become a new destination. This new city landmark does not only represent the national identity but also functions as a new public space for locals and tourists. 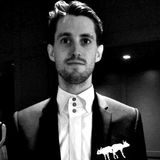 2013 newsletter of student works for the International Program in Design and Architecture at Chulalongkorn University, Bangkok, Thailand

2013 newsletter of student works for the International Program in Design and Architecture at Chulalongkorn University, Bangkok, Thailand