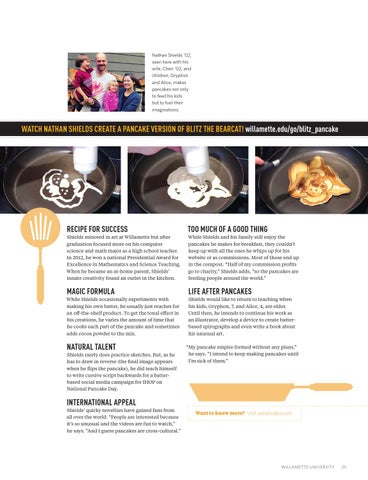 Nathan Shields ’02, seen here with his wife, Cheri ’02, and children, Gryphon and Alice, makes pancakes not only to feed his kids but to fuel their imaginations.

TOO MUCH OF A GOOD THING

Shields minored in art at Willamette but after graduation focused more on his computer science and math major as a high school teacher. In 2012, he won a national Presidential Award for Excellence in Mathematics and Science Teaching. When he became an at-home parent, Shields’ innate creativity found an outlet in the kitchen.

While Shields occasionally experiments with making his own batter, he usually just reaches for an off-the-shelf product. To get the tonal effect in his creations, he varies the amount of time that he cooks each part of the pancake and sometimes adds cocoa powder to the mix.

Shields rarely does practice sketches. But, as he has to draw in reverse (the final image appears when he flips the pancake), he did teach himself to write cursive script backwards for a batterbased social media campaign for IHOP on National Pancake Day.

While Shields and his family still enjoy the pancakes he makes for breakfast, they couldn’t keep up with all the ones he whips up for his website or as commissions. Most of those end up in the compost. “Half of my commission profits go to charity,” Shields adds, “so the pancakes are feeding people around the world.”

Shields would like to return to teaching when his kids, Gryphon, 7, and Alice, 4, are older. Until then, he intends to continue his work as an illustrator, develop a device to create batterbased spirographs and even write a book about his unusual art. “My pancake empire formed without any plans,” he says. “I intend to keep making pancakes until I’m sick of them.”

Shields’ quirky novelties have gained fans from all over the world. “People are interested because it’s so unusual and the videos are fun to watch,” he says. “And I guess pancakes are cross-cultural.”

Willamette, the magazine of Willamette University, is published three times each year by University Communications. Its purpose is to share...

Willamette, the magazine of Willamette University, is published three times each year by University Communications. Its purpose is to share...