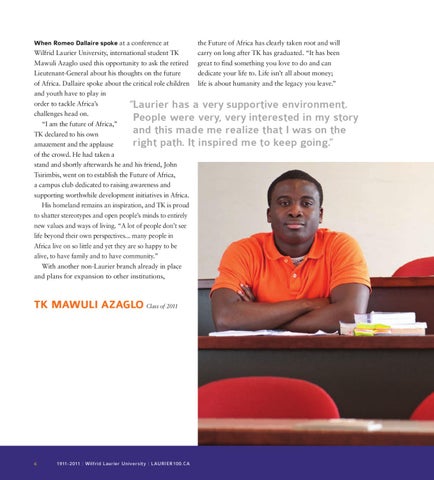 When Romeo Dallaire spoke at a conference at

the Future of Africa has clearly taken root and will

carry on long after TK has graduated. “It has been

Mawuli Azaglo used this opportunity to ask the retired

great to find something you love to do and can

Lieutenant-General about his thoughts on the future

dedicate your life to. Life isn’t all about money;

of Africa. Dallaire spoke about the critical role children

life is about humanity and the legacy you leave.”

and youth have to play in order to tackle Africa’s challenges head on. “I am the future of Africa,” TK declared to his own amazement and the applause

“Laurier has a very supportive environment. People were very, very interested in my story and this made me realize that I was on the right path. It inspired me to keep going.”

of the crowd. He had taken a stand and shortly afterwards he and his friend, John Tsirimbis, went on to establish the Future of Africa, a campus club dedicated to raising awareness and supporting worthwhile development initiatives in Africa. His homeland remains an inspiration, and TK is proud to shatter stereotypes and open people’s minds to entirely new values and ways of living. “A lot of people don’t see life beyond their own perspectives... many people in Africa live on so little and yet they are so happy to be alive, to have family and to have community.” With another non-Laurier branch already in place and plans for expansion to other institutions, 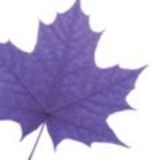 Insert that appeared in The Globe and Mail.

Insert that appeared in The Globe and Mail.