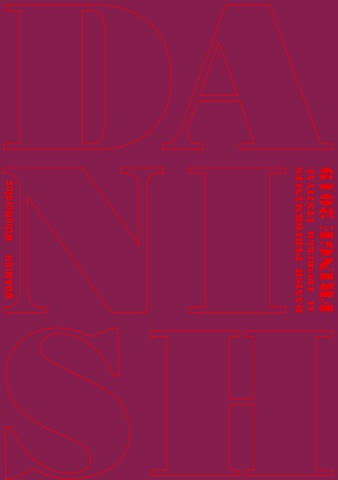 “…have a DANISH… performance in Edinburgh…”

Six performances created by DANISH artists are playing at Edinburgh Festival Fringe this year. All the listed shows work independently. There are dance performances from both Denmark’s leading urban dance company, Next Zone, and the humorous and innovative physical theatre company DON GNU. Experience New Danish Drama by award-winninged playwright Line Mørkeby (produced by London-based Cut the Cord Theatre), or check out the Copenhagenbased Theatre Grob – one of Denmark’s most internationally minded Theatres – as they collaborate with world class producers and artists in the performance HAPPY HOUR by Cristian Ceresoli. The world-touring clown Paolo Nani finds his home in Denmark, and in Edinburgh he performs one of his classic acts – THE LETTER. Meanwhile, the inimitable Sofie Hagen creates laughter in both the UK and Denmark with her wise and unabashed comedy. Humor in different shades might be one of the things these DANISH shows have in common. High quality definitely is. However, you should go and see that for yourself... Really.

The DANISH shows play at ZOO Southside and Pleasance

RAIDERS OF THE GREY GOLD - the dream of old age and the fear of reaching it! Featuring the all-male company’s uniquely raw physical stunts and slapstick comedy, RAIDERS OF THE GREY GOLD seamlessly merges daredevil acrobatic antics with moving musical poetry for a bittersweet reflection on life. DON GNU senses the increasing pace and decay of time, and while the soundtrack of life has taught ageing limbs plenty of forbidden steps, gravity is catching up with them. So they throw themselves into a blazing acrobatic battle against time in a quest for “the grey gold”, and to find the bittersweet beauty in ageing. Contact info: International producer: Malene Cathrine Pedersen malene@dongnu.dk / +45 22155818

About DON GNU DON GNU - Physical Theatre & Film is an artistic collaboration that focuses on dance and physical theatre. It was founded in 2010 by two choreographers Jannik Elkær and Kristoffer Louis Andrup Pedersen. Today, DON GNU is one of Denmark’s most regularly touring companies with extensive activities in both Denmark and abroad.

High energetic Urban Dance with Super Powers SUPER HUMAN explores and pushes the limits of the human body. In a unique and mind-awakening performance, the team redefine the human being in new optimised versions. Both supernatural and superhuman behaviour is in the spotlight as the performance gathers inspiration from sciencefiction movies, superheroes and real-life scientific experiments.

About Next Zone The distinctive choreographic language of Next Zone and choreographer Lene Boel builds on explorations of mental states, which are translated into extreme physical movements in a fusion of urban dance, new composed music and scenography lights.

THE LETTER A sparkling comedy classic and international hit show from “one of the world’s greatest clowns” (La Repubblica). Paolo Nani, alone on stage, with props that can be held in a suitcase and without saying a single word, performs 15 acts. All of them are based on the same theme, but are played in 15 hilarious versions. Stuffed with gags from start to finish, this ingenious performance has had audiences throughout the world in stitches - winning awards and critical acclaim in 45 countries!

About Paolo Nani Theatre: Paolo Nani is based in Denmark. He presents the art of the clown internationally, and for more than twenty-five years has toured worldwide with his shows and delighted audiences with his perfectionist style. He is a natural genius, a oneoff, and a clown who has been making us laugh for years.

Suitable for all ages and nationalities, Paolo Nani brings his cult show to Scotland for the first time.

About Sofie Hagen: Multi-award winning Sofie Hagen is a Danish London-based standup-comedian. Recently, she published the book â&#x20AC;&#x153;Happy Fat: Taking Up Space in a World That Wants to Shrink Youâ&#x20AC;?. Sofie Hagen burst onto the British scene by winning Best Newcomer at Edinburgh Festival Fringe 2015.

As seen on Live from the BBC and her own episode of Comedy Central Specials.

I Run is a Danish one-man play about running and grief A dad loses his 6-year old daughter to cancer, and his world falls apart. He doesn’t know how to process the life-shattering void following her premature death, so he starts running to deal with his loss. I RUN is a fast-paced and moving one-man play about how you survive the death of your child. It explores how exercise can improve mental health and why we find it so hard to talk about death. The performer runs on a treadmill throughout the entire show. The text is written by Danish playwright Line Mørkeby and directed by Danish director Camilla Gürtler.

About Cut the Cord Cut the Cord is a London-based theatre company which focuses on new writing and international collaborations in the UK, particularly Nordic. Cut the Cord explore social issues through bold visual narratives and movement, questioning what it means to be human. In 2020 the company will curate the first New Nordics Festival, a festival celebrating contemporary Nordic plays in London.

I RUN is part of Death on the Fringe.

HAPPY HOUR Teater Grob is the Danish co-producer of this show.

A new world where cheerful totalitarianism is the fashion; where cities promote hilarious mass deportations and funny exterminations; where its leopard-pattern clad locals will do anything to defend their enthusiasm.

This printed DANISH leaflet highlights the Danish shows at Edinburgh Festival Fringe 2019. The Danish companies all work independently. The leaflet is supported by Danish Arts Foundation, The Development Platform for Performing Arts and the Embassy of Denmark in the UK. You should know them DANISH ARTS FOUNDATION The Danish Arts Foundation supports and promotes Danish performing arts internationally by coordinating the Danish presence at relevant events and projects abroad. The Foundation facilitates residencies in Denmark and abroad, as well as visiting programmes for international performing arts professionals in order to increase awareness of Danish performing arts. kunst.dk/english

THE DEVELOPMENT PLATFORM FOR PERFORMING ARTS The Development Platform for the Performing Arts is a platform working to develop and upskill professional independent artists and performing arts producers throughout Denmark. We believe that the best road to development consists of knowledge sharing, peer-to-peer learning and collaboration across performing arts groups, theatres, institutions and sectors, and across cities and national borders. udviklingsplatformen.dk/en

EMBASSY OF DENMARK IN THE UK The Danish embassy in the UK works to promote Danish arts and culture in the United Kingdom, as well as facilitate direct cultural exchanges and projects between Danish and British artists, cultural institutions and other stakeholders. storbritannien.um.dk

WILDTOPIA AND EDINBURGH This printed DANISH leaflet is produced by the creative production and promotion company WILDTOPIA (DK). All the Danish shows listed work independently. However, joining forces is essential when attending the worldâ&#x20AC;&#x2122;s biggest festival. Coming from a small country where everybody knows at least two languages, Danes are used to reaching out and collaborating. This can also be traced back to the Danish welfare state based on a system where people get help when they need it. WILDTOPIA believe in supporting each other, to grow together. WILDTOPIA has fostered a Nordic collaboration with other Nordic organisations navigating Edinburgh Festival Fringe in 2018, and in 2019 they continue this collaboration. You can read more about NORDIC PRESENCE at wildtopia.dk.

Supporting each other, to grow together

WILDTOPIA is founded by Producer Gitte Nielsen and Publicist & Festival Producer Karen Toftegaard. Gitte Nielsen is an experienced producer. She produced BLAM! by KristjĂĄn Ingimarsson Company which played at Pleasance, Grand in 2013 + 2015. Karen Toftegaard has developed and worked with several festivals in Denmark a.o. CPH STAGE and Metropolis. wildtopia.dk WILDTOPIA - creative production and promotion company based in Denmark