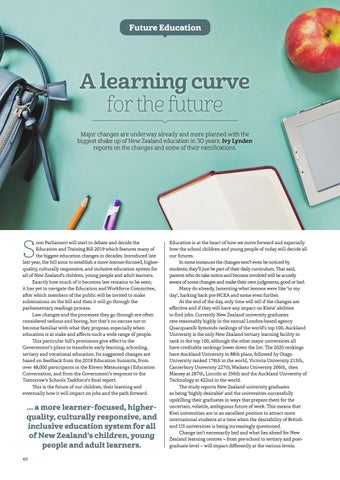 A learning curve for the future Major changes are underway already and more planned with the biggest shake up of New Zealand education in 30 years. Ivy Lynden reports on the changes and some of their ramifications.

oon Parliament will start to debate and decide the Education and Training Bill 2019 which features many of the biggest education changes in decades. Introduced late last year, the bill aims to establish a more learner-focused, higherquality, culturally responsive, and inclusive education system for all of New Zealand’s children, young people and adult learners. Exactly how much of it becomes law remains to be seen; it has yet to navigate the Education and Workforce Committee, after which members of the public will be invited to make submissions on the bill and then it will go through the parliamentary readings process. Law changes and the processes they go through are often considered tedious and boring, but that’s no excuse not to become familiar with what they propose, especially when education is at stake and affects such a wide range of people. This particular bill’s provisions give effect to the Government’s plans to transform early learning, schooling, tertiary and vocational education. Its suggested changes are based on feedback from the 2018 Education Summits, from over 48,000 participants in the Kōrero Mātauranga | Education Conversation, and from the Government’s response to the Tomorrow’s Schools Taskforce’s final report. This is the future of our children, their learning and eventually how it will impact on jobs and the path forward.

Education is at the heart of how we move forward and especially how the school children and young people of today will decide all our futures. In some instances the changes won’t even be noticed by students; they’ll just be part of their daily curriculum. That said, parents who do take notice and become involved will be acutely aware of some changes and make their own judgments, good or bad. Many do already, lamenting what lessons were like ‘in my day’, harking back pre-NCEA and some even further. At the end of the day, only time will tell if the changes are effective and if they will have any impact on Kiwis’ abilities to find jobs. Currently New Zealand university graduates rate reasonably highly in the annual London-based agency Quacquarelli Symonds rankings of the world’s top 100. Auckland University is the only New Zealand tertiary learning facility to rank in the top 100, although the other major universities all have creditable rankings lower down the list. The 2020 rankings have Auckland University in 88th place, followed by Otago University ranked 176th in the world, Victoria University 215th, Canterbury University 227th, Waikato University 266th, then Massey at 287th, Lincoln at 356th and the Auckland University of Technology at 422nd in the world. The study reports New Zealand university graduates as being ‘highly desirable’ and the universities successfully upskilling their graduates in ways that prepare them for the uncertain, volatile, ambiguous future of work. This means that Kiwi universities are in an excellent position to attract more international students at a time when the desirability of British and US universities is being increasingly questioned. Change isn’t necessarily bad and what lies ahead for New Zealand learning centres – from pre-school to tertiary and postgraduate level – will impact differently at the various levels.