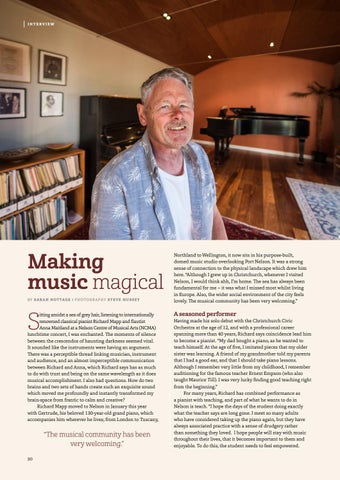 itting amidst a sea of grey hair, listening to internationally renowned classical pianist Richard Mapp and flautist Anna Maitland at a Nelson Centre of Musical Arts (NCMA) lunchtime concert, I was enchanted. The moments of silence between the crescendos of haunting darkness seemed vital. It sounded like the instruments were having an argument. There was a perceptible thread linking musician, instrument and audience, and an almost imperceptible communication between Richard and Anna, which Richard says has as much to do with trust and being on the same wavelength as it does musical accomplishment. I also had questions. How do two brains and two sets of hands create such an exquisite sound which moved me profoundly and instantly transformed my brain-space from frantic to calm and creative? Richard Mapp moved to Nelson in January this year with Gertrude, his beloved 130-year-old grand piano, which accompanies him wherever he lives; from London to Tuscany,

“The musical community has been very welcoming.” 20

Northland to Wellington, it now sits in his purpose-built, domed music studio overlooking Port Nelson. It was a strong sense of connection to the physical landscape which drew him here. “Although I grew up in Christchurch, whenever I visited Nelson, I would think ahh, I’m home. The sea has always been fundamental for me – it was what I missed most whilst living in Europe. Also, the wider social environment of the city feels lovely. The musical community has been very welcoming.”

Having made his solo debut with the Christchurch Civic Orchestra at the age of 12, and with a professional career spanning more than 40 years, Richard says coincidence lead him to become a pianist. “My dad bought a piano, as he wanted to teach himself. At the age of five, I imitated pieces that my older sister was learning. A friend of my grandmother told my parents that I had a good ear, and that I should take piano lessons. Although I remember very little from my childhood, I remember auditioning for the famous teacher Ernest Empson (who also taught Maurice Till). I was very lucky finding good teaching right from the beginning.” For many years, Richard has combined performance as a pianist with teaching, and part of what he wants to do in Nelson is teach. “I hope the days of the student doing exactly what the teacher says are long gone. I meet so many adults who have considered taking up the piano again, but they have always associated practice with a sense of drudgery rather than something they loved. I hope people will stay with music throughout their lives, that it becomes important to them and enjoyable. To do this, the student needs to feel empowered. 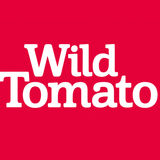