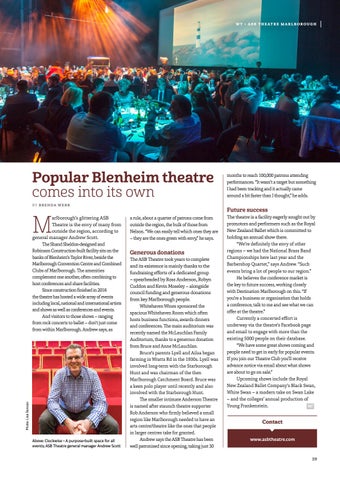 Popular Blenheim theatre comes into its own BY BRENDA WEBB

arlborough’s glittering ASB Theatre is the envy of many from outside the region, according to general manager Andrew Scott. The Shand Sheldon-designed and Robinson Construction-built facility sits on the banks of Blenheim’s Taylor River, beside the Marlborough Convention Centre and Combined Clubs of Marlborough. The amenities complement one another, often combining to host conferences and share facilities. Since construction finished in 2016 the theatre has hosted a wide array of events including local, national and international artists and shows as well as conferences and events. And visitors to those shows – ranging from rock concerts to ballet – don’t just come from within Marlborough. Andrew says, as

months to reach 100,000 patrons attending performances. “It wasn’t a target but something I had been tracking and it actually came around a bit faster than I thought,” he adds.

Future success a rule, about a quarter of patrons come from outside the region, the bulk of those from Nelson. “We can easily tell which ones they are – they are the ones green with envy,” he says.

Generous donations The ASB Theatre took years to complete and its existence is mainly thanks to the fundraising efforts of a dedicated group – spearheaded by Ross Anderson, Robyn Cuddon and Kevin Moseley – alongside council funding and generous donations from key Marlborough people. Whitehaven Wines sponsored the spacious Whitehaven Room which often hosts business functions, awards dinners and conferences. The main auditorium was recently named the McLauchlan Family Auditorium, thanks to a generous donation from Bruce and Anne McLauchlan. Bruce’s parents Lyell and Ailsa began farming in Wratts Rd in the 1930s. Lyell was involved long-term with the Starborough Hunt and was chairman of the then Marlborough Catchment Board. Bruce was a keen polo player until recently and also involved with the Starborough Hunt. The smaller intimate Anderson Theatre is named after staunch theatre supporter Rob Anderson who firmly believed a small region like Marlborough needed to have an arts centre/theatre like the ones that people in larger centres take for granted. Andrew says the ASB Theatre has been well patronised since opening, taking just 30

The theatre is a facility eagerly sought out by promotors and performers such as the Royal New Zealand Ballet which is committed to holding an annual show there. “We’re definitely the envy of other regions – we had the National Brass Band Championships here last year and the Barbershop Quartet,” says Andrew. “Such events bring a lot of people to our region.” He believes the conference market is the key to future success, working closely with Destination Marlborough on this. “If you’re a business or organisation that holds a conference, talk to me and see what we can offer at the theatre.” Currently a concerted effort is underway via the theatre’s Facebook page and email to engage with more than the existing 5000 people on their database. “We have some great shows coming and people need to get in early for popular events. If you join our Theatre Club you’ll receive advance notice via email about what shows are about to go on sale.” Upcoming shows include the Royal New Zealand Ballet Company’s Black Swan, White Swan – a modern take on Swan Lake – and the colleges’ annual production of Young Frankenstein.