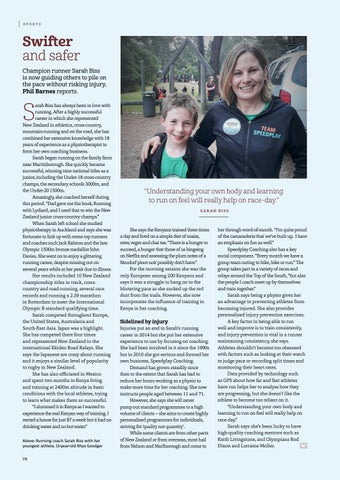 Swifter and safer Champion runner Sarah Biss is now guiding others to pile on the pace without risking injury, Phil Barnes reports.

arah Biss has always been in love with running. After a highly successful career in which she represented New Zealand in athletics, cross-country, mountain-running and on the road, she has combined her extensive knowledge with 18 years of experience as a physiotherapist to form her own coaching business. Sarah began running on the family farm near Martinborough. She quickly became successful, winning nine national titles as a junior, including the Under-18 cross-country champs, the secondary schools 3000m, and the Under-20 1500m. Amazingly, she coached herself during this period. “Dad gave me the book, Running with Lydiard, and I used that to win the New Zealand junior cross-country champs.” When Sarah left school she studied physiotherapy in Auckland and says she was fortunate to link up with some top runners and coaches such Jack Ralston and the late Olympic 1500m bronze medallist John Davies. She went on to enjoy a glittering running career, despite missing out on several years while at her peak due to illness. Her results included 10 New Zealand championship titles in track, crosscountry and road-running, several race records and running a 2.39 marathon in Rotterdam to meet the International Olympic B standard qualifying time. Sarah competed throughout Europe, the United States, Australasia and South-East Asia. Japan was a highlight. She has competed there four times and represented New Zealand in the international Ekiden Road Relays. She says the Japanese are crazy about running and it enjoys a similar level of popularity to rugby in New Zealand. She has also officiated in Mexico and spent two months in Kenya living and training at 2400m altitude in basic conditions with the local athletes, trying to learn what makes them so successful. “I slummed it in Kenya as I wanted to experience the real Kenyan way of training. I rented a house for just $7 a week but it had no drinking water and no hot water.” Above: Running coach Sarah Biss with her youngest athlete, 11-year-old Rhys Goodger 78

“Understanding your own body and learning to run on feel will really help on race-day.” SARAH BISS

She says the Kenyans trained three times a day and lived on a simple diet of maize, stew, veges and chai tea. “There is a hunger to succeed, a hunger that those of us bingeing on Netflix and assessing the plum notes of a Neudorf pinot noir possibly don’t have.” For the morning session she was the only European among 200 Kenyans and says it was a struggle to hang on to the blistering pace as she sucked up the red dust from the trails. However, she now incorporates the influence of training in Kenya in her coaching.

Sidelined by injury Injuries put an end to Sarah’s running career in 2014 but she put her extensive experience to use by focusing on coaching. She had been involved in it since the 1990s but in 2016 she got serious and formed her own business, Speedplay Coaching. Demand has grown steadily since then to the extent that Sarah has had to reduce her hours working as a physio to make more time for her coaching. She now instructs people aged between 11 and 71. However, she says she will never pump out standard programmes to a high volume of clients – she aims to create highly personalised programmes for individuals, striving for ‘quality not quantity’. While some clients are from other parts of New Zealand or from overseas, most hail from Nelson and Marlborough and come to

her through word-of-mouth. “I’m quite proud of the camaraderie that we’ve built up. I have an emphasis on fun as well.” Speedplay Coaching also has a key social component. “Every month we have a group team outing to hike, bike or run.” The group takes part in a variety of races and relays around the Top of the South, “but also the people I coach meet up by themselves and train together.” Sarah says being a physio gives her an advantage in preventing athletes from becoming injured. She also provides personalised injury prevention exercises. A key factor in being able to run well and improve is to train consistently, and injury prevention is vital in a runner maintaining consistency, she says. Athletes shouldn’t become too obsessed with factors such as looking at their watch to judge pace or recording split times and monitoring their heart rates. Data provided by technology such as GPS about how far and fast athletes have run helps her to analyse how they are progressing, but she doesn’t like the athlete to become too reliant on it. “Understanding your own body and learning to run on feel will really help on race-day.” Sarah says she’s been lucky to have high-quality coaching mentors such as Keith Livingstone, and Olympians Rod Dixon and Lorraine Moller.