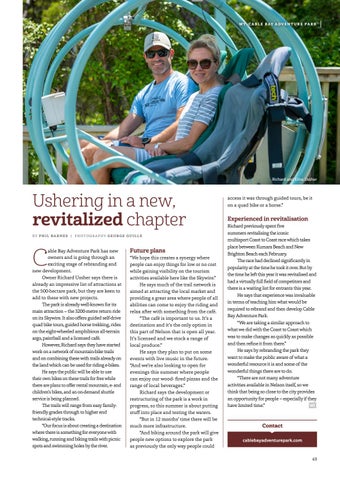 able Bay Adventure Park has new owners and is going through an exciting stage of rebranding and new development. Owner Richard Ussher says there is already an impressive list of attractions at the 500-hectare park, but they are keen to add to these with new projects. The park is already well-known for its main attraction – the 3200-metre return ride on its Skywire. It also offers guided self-drive quad bike tours, guided horse trekking, rides on the eight-wheeled amphibious all-terrain argo, paintball and a licensed café. However, Richard says they have started work on a network of mountain-bike trails and on combining these with trails already on the land which can be used for riding e-bikes. He says the public will be able to use their own bikes on these trails for free while there are plans to offer rental mountain, e- and children’s bikes, and an on-demand shuttle service is being planned. The trails will range from easy familyfriendly grades through to higher end technical-style tracks. “Our focus is about creating a destination where there is something for everyone with walking, running and biking trails with picnic spots and swimming holes by the river.

Future plans “We hope this creates a synergy where people can enjoy things for low or no cost while gaining visibility on the tourism activities available here like the Skywire.” He says much of the trail network is aimed at attracting the local market and providing a great area where people of all abilities can come to enjoy the riding and relax after with something from the café. “The café is important to us. It’s a destination and it’s the only option in this part of Nelson that is open all year. It’s licensed and we stock a range of local produce.” He says they plan to put on some events with live music in the future. “And we’re also looking to open for evenings this summer where people can enjoy our wood- fired pizzas and the range of local beverages.” Richard says the development or restructuring of the park is a work in progress, so this summer is about putting stuff into place and testing the waters. “But in 12 months’ time there will be much more infrastructure. “And biking around the park will give people new options to explore the park as previously the only way people could

access it was through guided tours, be it on a quad bike or a horse.”

Experienced in revitalisation Richard previously spent five summers revitalising the iconic multisport Coast to Coast race which takes place between Kumara Beach and New Brighton Beach each February. The race had declined significantly in popularity at the time he took it over. But by the time he left this year it was revitalised and had a virtually full field of competitors and there is a waiting list for entrants this year. He says that experience was invaluable in terms of teaching him what would be required to rebrand and then develop Cable Bay Adventure Park. “We are taking a similar approach to what we did with the Coast to Coast which was to make changes as quickly as possible and then refine it from there.” He says by rebranding the park they want to make the public aware of what a wonderful resource it is and some of the wonderful things there are to do. “There are not many adventure activities available in Nelson itself, so we think that being so close to the city provides an opportunity for people – especially if they have limited time.”