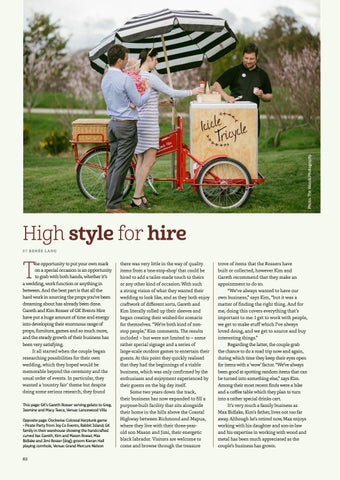 he opportunity to put your own mark on a special occasion is an opportunity to grab with both hands, whether it’s a wedding, work function or anything in between. And the best part is that all the hard work in sourcing the props you’ve been dreaming about has already been done. Gareth and Kim Rosser of GK Events Hire have put a huge amount of time and energy into developing their enormous range of props, furniture, games and so much more, and the steady growth of their business has been very satisfying. It all started when the couple began researching possibilities for their own wedding, which they hoped would be memorable beyond the ceremony and the usual order of events. In particular, they wanted a ‘country fair’ theme but despite doing some serious research, they found This page: GK’s Gareth Rosser serving gelato to Greg, Jasmine and Macy Teece, Venue: Lancewood Villa Opposite page: Clockwise: Colossal Kerplunk game - Pirate Party from Joy Co Events, Rabbit Island; GK family in their warehouse showing the handcrafted curved bar. Gareth, Kim and Mason Rosser, Max Bidlake and Jimi Rosser (dog); groom Kieran Hall playing cornhole, Venue: Grand Mercure Nelson 82

there was very little in the way of quality items from a ‘one-stop-shop’ that could be hired to add a tailor-made touch to theirs or any other kind of occasion. With such a strong vision of what they wanted their wedding to look like, and as they both enjoy craftwork of different sorts, Gareth and Kim literally rolled up their sleeves and began creating their wished-for scenario for themselves. “We’re both kind of nonstop people,” Kim comments. The results included – but were not limited to – some rather special signage and a series of large-scale outdoor games to entertain their guests. At this point they quickly realised that they had the beginnings of a viable business, which was only confirmed by the enthusiasm and enjoyment experienced by their guests on the big day itself. Some two years down the track, their business has now expanded to fill a purpose-built facility that sits alongside their home in the hills above the Coastal Highway between Richmond and Mapua, where they live with their three-yearold son Mason and Jimi, their energetic black labrador. Visitors are welcome to come and browse through the treasure

trove of items that the Rossers have built or collected, however Kim and Gareth recommend that they make an appointment to do so. “We’ve always wanted to have our own business,” says Kim, “but it was a matter of finding the right thing. And for me, doing this covers everything that’s important to me: I get to work with people, we get to make stuff which I’ve always loved doing, and we get to source and buy interesting things.” Regarding the latter, the couple grab the chance to do a road trip now and again, during which time they keep their eyes open for items with a ‘wow’ factor. “We’ve always been good at spotting random items that can be turned into something else,” says Kim. Among their most recent finds were a bike and a coffee table which they plan to turn into a rather special drinks cart. It’s very much a family business as Max Bidlake, Kim’s father, lives not too far away. Although he’s retired now, Max enjoys working with his daughter and son-in-law and his expertise in working with wood and metal has been much appreciated as the couple’s business has grown.